Youths accused of eve-teasing rained with lathi blows, made to lick their own spit

THE INCIDENT TOOK PLACE IN DARBHANGA DISTRICT OF BIHAR 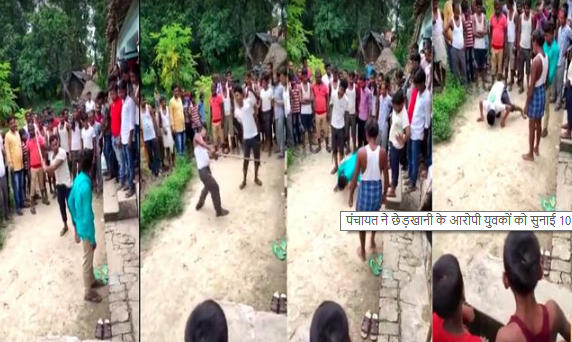 PATNA: A village court in Bihar ordered two youths to lick their own spit and then to be rained with stick blows for allegedly eve-teasing a girls. The police have ordered an investigation.

The incident took place at Madhuban village under Baheri police station in Darbhanga district. A video of the incident has gone viral in the social media.

According to reports in the local media, two youths had been allegedly eve-teasing girls going to school in the locality.

Subsequently, the girls reported the matter to their parents after which the local villagers caught the youths and brought them to their village.

Very soon, a village court was held over the issue. The court ordered for beating the accused youths with lathis (bamboo sticks) 10 times each.

Subsequently, both the youths were rained with lathi blows in the presence of the crowd. After then, they were told to lick their own spit which they hurriedly did out of fear of being thrashed further.

Darbhanga’s senior superintendent of police Ram Babu said he had taken cognizance of the incident and ordered the police to investigate the case.