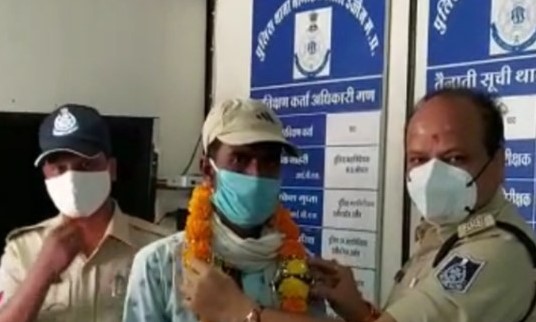 PATNA/UJJAIN—A man from Bihar who travelled 140 km on his cycle to surrender before the police in Ujjain town of Madhya Pradesh was jailed shortly after being honoured with a garland.

Mukesh Kumar, a resident of Sitamarhi district in Bihar, had some brawls with his relatives in Ujjain some six years back after which a case was registered against him with the local police station. The man stayed in Ujjain at that time.

After his marriage with a girl from Bihar, he finally shifted to his home district and had been staying there since then.

Recently, a warrant was issued against the man after which he rushed to Ujjain to surrender before the local police. Local media reported the poor youth covered the distance of 1400 km on his cycle in 10 days.

When the cops came to know how he travelled hundreds of kilometers on his rickety cycle to appear before them, they welcomed him with a garland of flowers.

Soon after his surrender, however, he was produced before the local court which forwarded him to jail.

Denied ticket, BJP legislator vows to quit grains for rest of his life