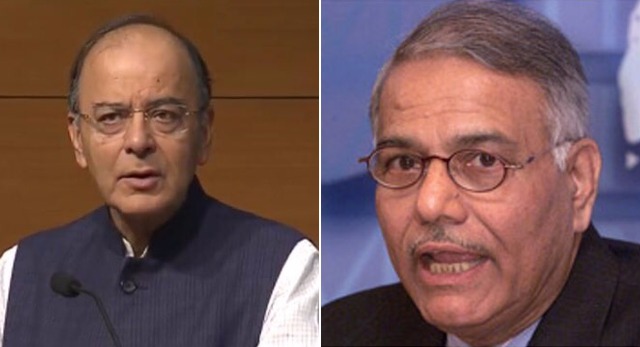 New Delhi: The verbal duel between former and present finance ministers of India, Yashwant Sinha and Arun Jaitley respectively took a fresh turn on Friday with the former again attacking his party colleague this time over the job application remark.

Jaitley, at the launch of a book titled as India@70, Modi@3.5: Capturing India’s Transformation Under Narendra Modi, took a jibe at Sinha saying that the book should have been named as “India@70, Modi@3.5 and job applicant@80”.

Sinha, who is in no mood to back down, has countered to say: “..if I was a job applicant, he (Jaitley) would not be there in the first place.”

Speaking at the Nehru Memorial Museum and Library, he said the Narendra Modi government did not shy away from tough decisions and has ended the policy paralysis of the previous UPA rule.

He said the GST decisions were taken in consensus and there are some teething problems.

He also defended  demonetisation decision along with GST.

Earlier the war or words intensified when Yashwant Sinha, who recently blasted  Arun Jaitley and also did not spare Prime Minister Narendra Modi for pursuing “wrong economic policies”, said a rebuttal of what he said by his son and union minister Jayant Sinha in an article was “the easiest and cheapest” response to his scathing attack on the government.

Sinha told NDTV that if his son, Jayant Sinha, who is a union minister, was asked to write an opinion piece defending the government, then “it is a cheap trick to turn a son against his father.”

“He is doing his dharma, I am doing mine,” he told the news channel on their opposing views on the economy.

In an article in The Economic Times, Jayant Sinha refuting his own father’s criticism of the Modi government and Arun Jaitley said: “GST, demonetisation and digital payments are game-changing efforts to formalise India’s economy. Transactions that were taking place outside of the tax net and in the informal sector are now being brought into the formal sector. In the long term, formalisation will mean (a) tax collections go up and more resources are available to the state; (b) friction in the economy is reduced and GDP goes up; and (c) citizens are able to establish credit more effectively as transaction records are digitised.”

Jayant Sinha said the recent articles against the government “draw sweeping conclusions from a narrow set of facts, and quite simply miss the fundamental structural reforms that are transforming the economy.”

In his scathing article, Yashwant Sinha criticised the way Jaitley handled the ministry.

Sinha said: “I shall be failing in my national duty if I did not speak up even now against the mess the finance minister has made of the economy.”

“I am also convinced that what I am going to say reflects the sentiments of a large number of people in the BJP and elsewhere who are not speaking up out of fear,” he added.

The veteran leader has accused Jaitley of instilling fear in the minds of Indians.