Women tonsured, made to eat human excreta for being ‘witches’ 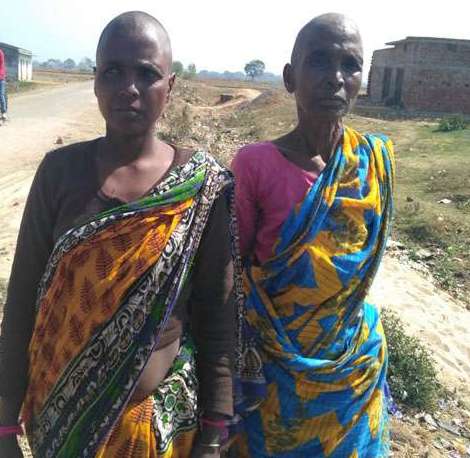 PATNA: Two women, both mother and daughter, were dragged out of their homes, tonsured and forced to eat human excreta on the suspicion of being “witches” in Jharkhand state on Thursday.

The horrible incident which took place at Dulami village under Sonahatu police station in Ranchi, the capital of Jharkhand, amply indicates how this state remains in the grip of superstition despite all efforts.

As per reports, the victims identified as Karo Devi, 65 and her daughter Basanti Devi, 35, were dragged out of their homes on Thursday morning and were presented before a village court at which they were branded as “witches”. Subsequently, they had their heads shaven and were also forced to consume human excreta.

“They (villagers) dragged us out of our home and then dirtied our clothes with night soil before forcing us to consume it too. They told us we are witches,” the victims told the media on Friday.

Subsequently, they were taken to a local river where their bangles were broken. They were then told discard the clothes they were wearing and take a dip in the river. They were given new white clothes—which are symbols of widowhood in Hindu mythology—to wear before allowing them to go to home.

The punishment followed soon after a woman died in the neighbourhood a few days ago after prolonged illness. The family members of sick villagers later called for a witch doctor who blamed these two women behind the “supernatural attack”.

“They have been straightway blaming us if anyone fell ill in the village but this time they crossed all limits of brutality,” the victims said. The victims later approached the local police and registered a case with them.

“We are investigating the case,” a local police official Ajit Peter told the local media. The police have launched operation to nab the absconding accused persons.

This is the second major incident in the past few years. In August 2015, five women were dragged out of their homes at the dead of night, taken to an open space and crushed to death with hard boulders by the villagers in Jharkhand, suspecting them to be witches.

According to an official report, altogether 183 women have been killed in Jharkhand in the past four years over witchcraft allegations. The shocking revelation came when the home ministry informed the Rajya Sabha in December last year. Of them, 42 women were killed in the state 2017 itself, according to the report.

Authorities have sought for launching an intensive awareness drive in the areas to contain such witchcraft killings. “Such incidents are taking place despite the laws already in the place to tackle them. There is an urgent need to train the village council members and launch an extensive awareness drive in the society,” said Ajay Kumar, a NGO official.