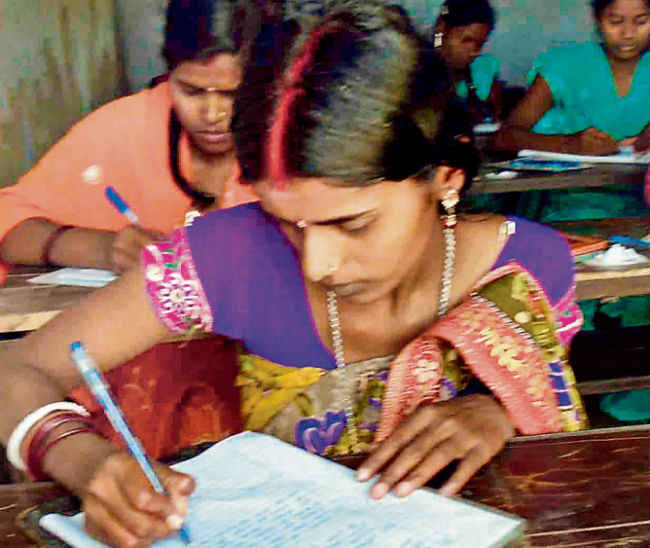 A matriculation examinee Bina Kumari with a baby in her arm was driven out of her in-laws’ home in Bihar after she dared to appear at the ongoing Class 10 Board examination, distressing the society. However, the trouble has not deterred her from taking the exam and she is now hell-bent on completing the exam come what may.

As per reports, woman, a resident of Parikiya Tola village under Biharignaj block in Madhepura district wanted to pursue education much against her in-laws’ wishes. This love ultimately forced her to register herself for the matriculation exam and finally she even reached her exam centre at Harihar Sah College, Udakishunganj to appear at the exam when it began last week.

However, her action irritated her in-laws so much so that they drove her out of home on Monday shortly after she returned home from taking exam while her husband was away. Her husband Mukesh Sah is a migrant labour who works in Punjab.

Left with no option, the woman carried her one-year-old baby in her arm and silently reached the nearby Bihariganj railway station where she passed the entire night, going empty-belly.

Undettered by the turn of events, she reached the exam centre the very next day for appearing for another paper when her condition deteriorated.

On being asked, she narrated the whole story to the invigilator who instantly arranged food for her and her baby.

“I decided to take exam despite all the problems created by my in-laws. They were totally against me taking exam and wanted me to do household chores and take care of cattle at home,” she reportedly told the invigilator.

Moved by her condition, the invigilator also made her lodging arrangements at the exam centre until her parents come and take her home while also informing the Women Helpline to initiate action against her in-laws.

“We have taken the matter seriously and action will be taken against the in-laws,” a local child development project office Jaishree Das told the media today adding they saluted the boldness of the examinee who preferred education to relations.

‘Owaisi should leave India if does not love his mother country’

Beware! Drinking in public could get you 10 year jail term in Bihar