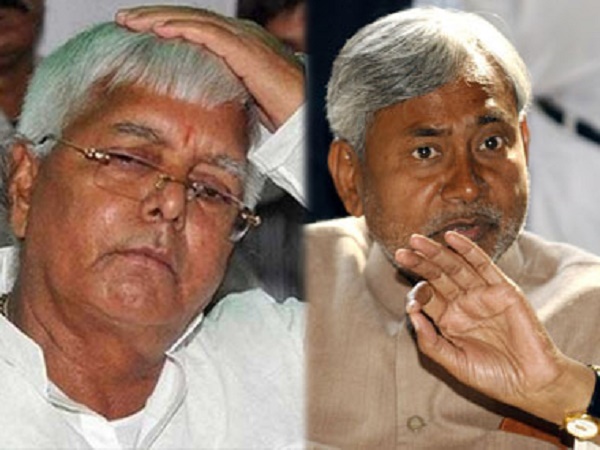 PATNA: A friend in need is a friend indeed but sadly in Bihar, all the three coalition partners despite being part of the ruling Grand Alliance (GA) appear to be fighting a lonely battle, much to the amusement of the opposition.

There is hardly any coordination among the three partners— the Rashtriya Janata Dal headed by lalu Prasad, Janata Dal United led by Nitish Kumar and the Congress party— leaving them to fend for themselves at this really critical time when problems are aplenty for all of them.

Although they never seemed too close right since coming to power, a spate of troubles has left the split wide open in public.

If the JD-U distanced itself from the land deal controversies of the RJD chief family, the RJD has now refused to come to the aid of the chief minister and JD-U chief Nitish Kumar on the row over intermediate topper scam for the second consecutive year and constant protests by the students over poor pass percentage in the inter exam.

Students across the state is up in arms after around 70 percent of them were declared having failed the class 12 exam conducted by the Bihar School Examination Board.

The trouble began last month when a senior BJP leader Sushil Kumar Modi came out with a sensational expose on RJD president Prasad and family allegedly getting involved in over Rs 1,000 crore benami land deals.

Even as the BJP continued launching one after another attacks on the RJD, the JD-U maintained mysterious silence over the issue.

Instead, the chief minister asked the BJP government at the centre to act if the charges against the RJD were true. This was soon followed by raids at 22 locations in Delhi and adjoining areas over the alleged land deals.

With its main ally, the JD-U, distancing itself from these controversies, the RJD was left with no option but to fight the battle on its own. Subsequently, all the senior leaders and spokespersons were told by the RJD boss to hold regular press conference and give clarifications over the BJP allegations.

Now, the problems seem to have now moved towards the chief minister. Mr Kumar who claims to have launched a crackdown on corruption faces embarrassment for the second topper scandal in a row.

Ganesh Kumar, a 42-year-old man and father of two children who topped class XII exam in humanities stream, has since been arrested and jailed for forgery.

Last year, Ruby Rai who topped in the same humanities stream had failed to properly out the subjects she had studied and pronounced the political science as “Prodikal Science”.

Meanwhile, the RJD has joined the opposition camp in launching a scathing attack on the ruling government over the topper scam.

“The topper scandal is the biggest blot on the face of the government and the Nitish Kumar government just can’t escape from its responsibility,” RJD vice-president Raghuvansh Prasad Singh said.

The Congress too has flayed the government for this scam although the education minister Ashok Chaudhary is from the Congress party.

Apparently in a rely, the RJD chief stayed away from the birthday bash of DMK chief M Karunanidhi in Chennai while Bihar chief minister attended it.

Just ahead of 69th B’day, Lalu suffers yet another setback- second time in a month!