By Madhulata Chaurasia Last updated May 11, 2019 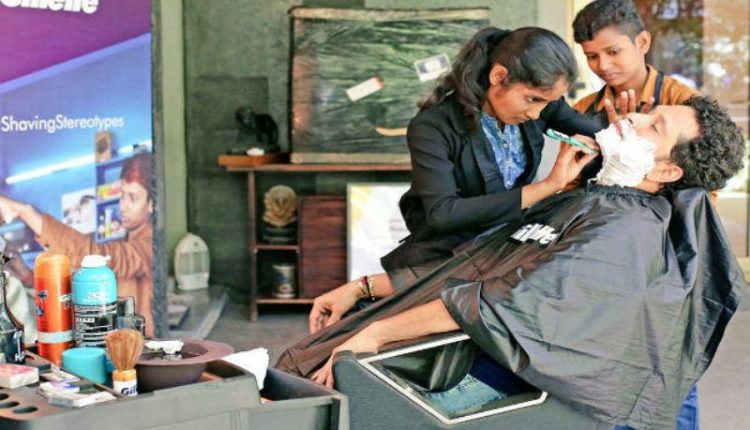 Kushinagar (UP): There was a time when two teenaged girls, daughters of a bed-ridden poor barber from Uttar Pradesh’s Kushinagar district, would disguise as boys at their father’s ancestral hair cutting salon to shave male customers so that they could earn money to run their family.

On Saturday, however, the little girls Jyoti Kumari and Neha Kumari removed their “fake cover” to shave none other than Sachin Tendulkar, brilliant Indian cricketer holding the unique record of having highest number of centuries in both Tests and ODIs as well as Test and ODIs combined.

As such, the struggle story these two girls have impressed many celebrities after both the Indian and foreign dailies, including The Guardian featured their stories prominently in their pages.

Eventually her struggle story also reached Tendulkar who rushed to their village to get himself shaved by the little girls at their small barber shop.

“This is the first time in my life that I have got a shave from some others. This record too got broken today,” said Tendulkar on Instagram adding it was a memorable experience for him to meet these girls and present them gillette India scholarship.

The girls had turned to the father’s ancestral business some four years back  after finding no alternative for survival of their family which comprised their bed-ridden father, aged mother and three little girls but no brothers. Also, the poor family didn’t have any landed properties.

The school-going girls were compelled to handle male customers—giving them haircuts, shaving beards and trimming their moustaches—after their father Dhruv Narayan who ran this shop earlier and was the lone source of livelihood suffered serious paralytic attacks in 2014.

The sudden and severe paralysis attacks left the head of the family on the bed, resulting in instant closure of salon and start of hard times for the family which was literally pushed on the brink of survival, family members said. The incident took place at a time when the both these girls were studying in a local government school.

“As the battle for our survival got tougher, we restarted our father salon one day to earn something. Soon came a young customer but we observed his behavior was not good towards us and hence we decided to change our whole get-up so that none could identify us,” Jyoti had said in an interview over phone. She gave the interview in February this year.

Very soon, both the sisters underwent a complete transformation. They dressed themselves up quite like males, sported boy’s hairstyle, wore stainless steel bracelets in hand, even changed their names like boys and also began behaving like boys. The result was that outside customers were just unable to identify them as they ran their business smoothly.

Their “reincarnation” not only helped the family of five survive but also continue their studies further. Now, elder girl Jyoti has passed the grade 12 examination while her younger sister Neha is pursuing intermediate education.

“We faced a lot of troubles when we started the job in 2014. Even co-villagers mocked us, ridiculed our works but we ignored their taunts and focused on our works since we had no option. Now we have gained enough confidence and don’t fear anyone although majority of people have come to know that we are girls,” explained Neha.

The girls said they would open the shop after attending classes in the school. “This way we earned money without disturbing our studies,” said Neha, younger sister who still is disguised as boy. His elder sister though has now begun keeping long hairs after gaining enough confidence.