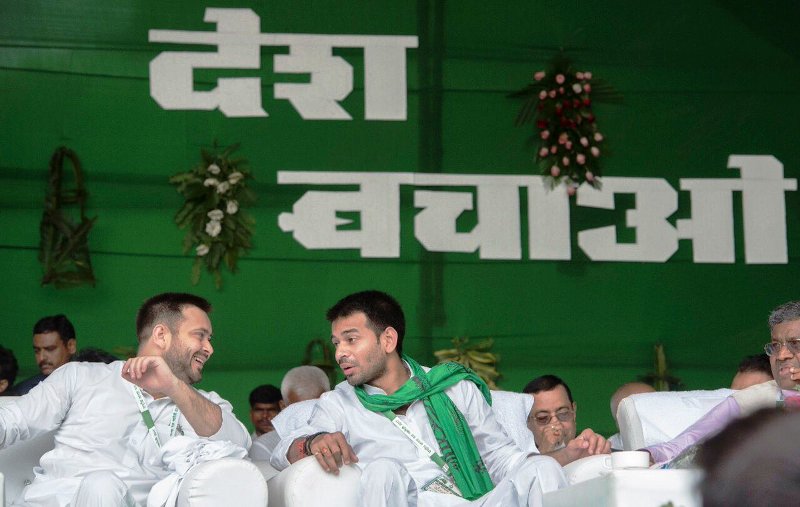 PATNA: Rashtriya Janata Dal (RJD) president Lalu Prasad would have been rather busy looking for “suitable” brides for his two young sons at this time if everything was fine at the family front.

But, now that he is caught in the worst kind of legal battle of his political career, he has virtually lost focus on fulfilling the family obligations of getting married his sons who happen to be the most suitable bachelors of Bihar.

As per reports, the RJD president was scheduled to solemnize the weddings of both his sons—Tej Pratap Yadav and Tejashwi Yadav—this year but the legal hurdles have suddenly come in the way of the wedding plans.

Both his sons were ministers in the previous Grand Alliance government. While Tej Pratap was the health minister, Tejashwi served as the deputy chief minister, in addition to being in charge of many key portfolios.

“The marriage was high on the agenda of my parents but that plan has been temporarily postponed given the problems in the family,” Tej Pratap told the local media, indicating the gravity of situation.

He blamed it on India’s premier investigation agency, the Central Bureau of Investigation (CBI) which has registered a case against his parents, Lalu Prasad and Rabri Devi as well as his younger brother Tejashwi in the land-for-railways hotel scam.

As such, the RJD chief got encouraged to search for suitable brides especially after his more suave younger son Tejashwi was flooded with marriage proposals on his official WhatsApp number that was issued to let villagers send complaints about road condition in their areas.

The number was issued in July last year while he served as the road construction in the erstwhile GA government headed by Nitish Kumar.

What was surprising, within days of this number issued, Tejashwi received more than 44,000 marriage proposals which left his parents hugely pleased.

His father was very quick to announce that he would marry his son soon. So was Tejashwi’s mother Rabri Devi who said she was looking for the girls “who don’t visit malls and cinema halls”.

However, she retracted her statement later after she was bitterly criticized in the media.

However, their plan is yet to see the light of the day as the family remains busier in making rounds of court and investigating agencies to prove their innocence in multiple corruption cases pending against them.

As such, the RJD president has hardly any time left to think over his sons’ marriage plans. He is currently required to routinely appear before a special CBI court in Ranchi which is hearing the fodder scam cases pending against him.

The problem has got multiplied further with the Supreme Court directing the trial courts to conclude the trials in all fodder scam cases within nine month.

In addition that the CBI is investigating the land-for-railway hotel scam as a result of which he is being questioned. His son and wife are also the accused in this case.

They are not the lone worry. The other investigating agencies, such as the Enforcement Directorate (ED) and Income Tax (IT) Department too are probing his benami assets case. So far, the ED and IT have confiscated four properties of Mr Prasad’s wife and daughters in Delhi and Patna.

While the ED has confiscated the Delhi farmhouse of his daughter Misa Bharti, a RJD parliamentarian, in the multi-billion money laundering case, IT attached three land plots of his wife Rabri Devi and daughter Hema Yadav in Patna.