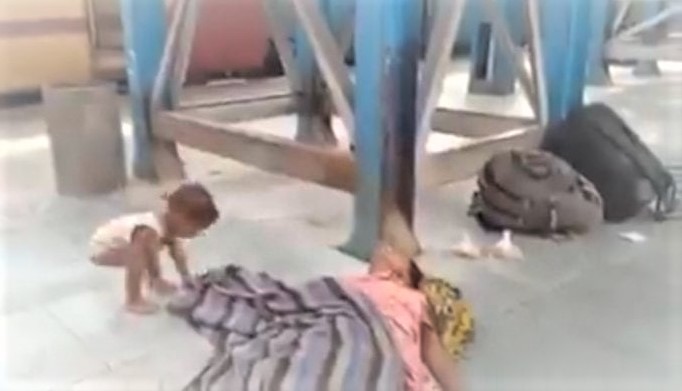 PATNA—A poignant visual of little child playing with his dead mother at a railway station in Bihar has gone viral in the social media, highlighting the pathetic plight of migrant workers left stranded after lockdown.

The video was apparently shot in Muzaffarpur railway station on May 25 when a Labour Special train carrying the victim had arrived carrying migrant workers from Gujarat.

The video shows the child coming near his dead mother, removing the coffin, peeping inside and then going a little distance away. He repeats this act time and again, leaving many in tears.

A migrant worker boarded the train from Gujarat to Muzaffarpur, Bihar. Mements before reaching Muzaffarpur, she died of dehydration, hunger and extreme heat. Her little son was trying to wake his dead mother up in the railway platform
Dedicating this video to the Railway minister pic.twitter.com/TnXuvyKQMZ

Railway officials said the woman identified as Arbina Khatoon, 35, had boarded Shramik Special train for migrants at Surat in Gujarat last week and was to reach Katihar but died midway. Many allege she died due to heat, hunger, exhaustion and dehydration.

But the railway officials cite another reason behind her death. “The woman with some family members was returning to her home when she complained of uneasiness and died soon. Her body was later taken down at the Muzaffarpur railway station,” east central railway spokesperson Rajesh Kumar told the media on Wednesday.

A massive exodus of migrant workers is on in several part of India right since the Indian government enforced lockdown to contain Corona spraed. Old timers say they had not not come across such exodus after partition.

According to an official report, there are around 40 million migrant labourers are engaged in various works in various parts of the country of which 7.5 million have returned home by trains and buses since the nationwide lockdown was imposed.

As far as Bihar is concerned, more than 1.5 million migrants have returned homes by Shramik Special trains while thousands others are return soon.