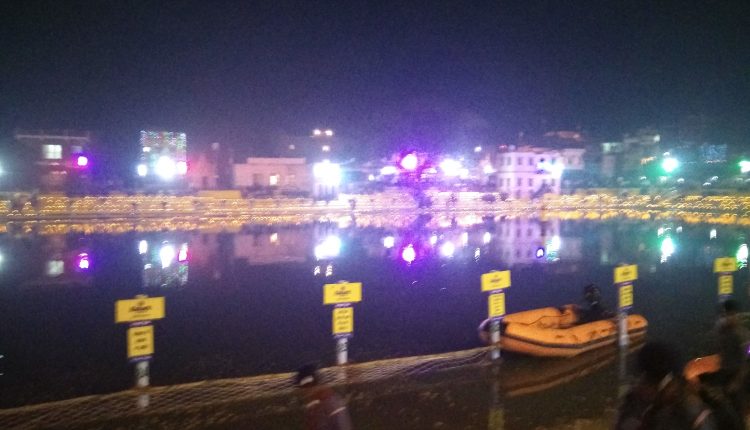 DEO, Aurangabad (Bihar): The holy city of Deo known for the famous Sun temple set a new record this year with around 15 lakh (1.5 million) devotees thronging the place to offer prayers to the rising and the setting Sun during the four-day Chhath festival which concluded on Sunday.

According to an estimate, the visit by Hindu pilgrims reached all-time high this year with every inch of the city captured by the pious devotees to indulge in religious activities.

Deo is famous for the Sun temple. The Temple is unique as it faces west, the setting sun, instead of the usual rising sun which is the case with the rest of temples dedicated to Lord Sun in India.

According to Hindu mythology, the temple was constructed by Lord Vishwakarma Himself in one night.

“Chhath”, an ancient Vedic festival historically native to the Indian subcontinent, more especially the Indian states of Bihar, Jharkhand and Uttar Pradesh, is one of the biggest festivals of Hindus.

The festival is celebrated to thank Sun for bestowing the bounties of life on the Earth and fulfilling particular wishes. Millions of people march on the rivers’ bank, to the ponds or other water bodies to offer prayers to the Sun God during this occasion.

Dressed in colourful clothes and observing strict perseverance, the unending crowd of devotees singing the religious songs, make beelines along the rivers’ bank and other bodies to please the Sun god.

Keeping in view the large crowd of the pilgrims, the local administration had made elaborate arrangements for happy conclusion of the festival yet it ended on a sour note.

The happy atmosphere suddenly turned into sorrow when two children were killed and over 30 injured in a stampede during offering of prayers to the setting Sun.

The stampede took place following a rumour that a live wire had fallen on the crowd of devotees marching towards the Surya Kund—the holy tank believed to have mystical powers.

Elsewhere in Bihar, around 60 people were killed during the four-day Chhath festival. Of them, 27 people alone were killed in the north-eastern Bihar, according to media reports.

Also Read: A typical Hindu temple where deities keep chatting all the time!