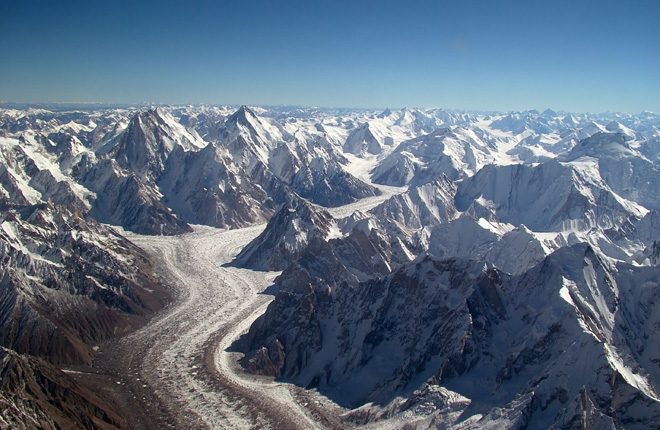 Indian researchers studying an unnamed glacier in one of the less explored region in the upper Kali Ganga valley, Pithoragarh district, Uttarakhand, India, have reported that the glacier had abruptly changed its main course.

It is for the first time that such change in course has been reported from a Himalayan glacier, and the researchers have attributed this to the accumulated influence of both climate and tectonics.

The abnormal behaviour of this unnamed glacier clearly suggests that not only is climate a controlling factor, but tectonics also plays an important role in glacial catchments.

The recent disaster in Rishiganga is a latest example which suggests that the rock mass on which the glacier was sitting gradually became fragile due to weathering, percolation of meltwater in joints, crevasses, freezing and thawing, snowfall, overloading, and gradually operating tectonic forces forcing rocks to mechanical disintegration with due course of time and detached from the source rock.

It clearly suggests that the Himalaya is an active mountain range and highly fragile where tectonics and climate play a critical role.

A team of scientists from Wadia Institute of Himalayan Geology (WIHG), Dehradun, Uttarakhand, an autonomous institute under the Department of Science & Technology, Government of India, found that the unnamed NE moving glacier had been abruptly truncated and forced to move towards SE.

Based on remote sensing and an old survey map, the study assessed that the glacier had been affected by active fault and climate change. Tectonic activity and change in climatic conditions had changed the course and morphology of this glacier. An active fault produced a fault scarp that measures about 250 m in height with a northerly dip. The fault trace is 6.2 km in length and trends towards NW-SE.

This study is based on the tectonically sculptured unique glacier landform was published in the ‘Geoscience Journal’.

The WIHG team observed that the 5 km long unnamed glacier, which covered around 4 kms. area in Kuthi Yankti valley (Tributary of Kali River), has abruptly changed its main course. It moved, truncated, and ultimately merged with the adjacent glacier named Sumzurkchanki as a result of tectonic forcing during the time between Last Glacial Maxima (19-24 ka) and Holocene.

It is one of the unique behaviours of the glacier, and no such observation has so far been reported on this type of glacier kinematics.

The study indicates that climate is not the only factor that triggers disasters in the Himalaya, which is an active mountain range, but tectonics also plays an important role in glacial catchments.

The study opens the doors for a new approach in glacier studies, particularly focused on the course change and evolution of new landforms formed by glacial-tectonic interplay.

Details of the study has appeared in an article titled “A report on tectonically sculptured unique glacier landform: a case study from the Tethys Kumaun Himalaya, India” penned by Manish Mehta, Rahul Devrani, Khayingshing Luirei and Vinit Kumar and published in Geosciences Journal on November 6, 2021.