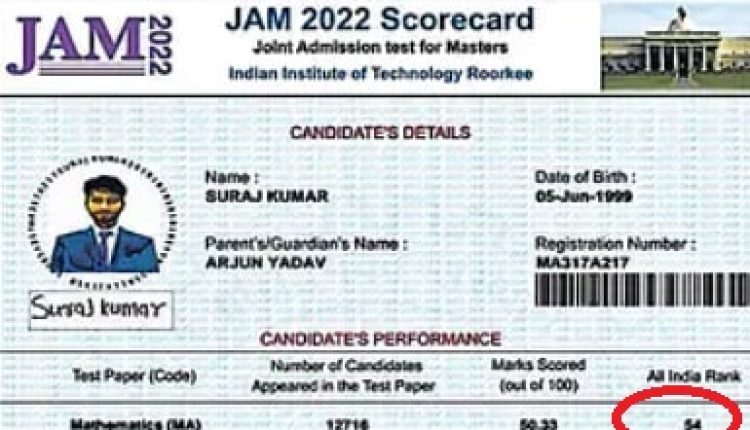 PATNA—An undertrial prisoner facing the murder charge has cleared the prestigious Joint Admission Test for Master (JAM) conducted by the Indian Institute of Technology (IIT), winning laurels from various quarters. The youth is currently lodged in a jail in Bihar for the past about a year yet he didn’t lose heart and focused his attention on study.

Jail authorities were pleasantly surprised after Suraj Kumar, a resident of Mosma village under Warisaliganj police station in Nawada district, secured the All India Rank (AIR) of 54 in the exam conducted by the IIT, Roorkee in February this year. He had appeared at the examination after getting parole from the jail.

JAM is a common admission test conducted every year for admission into Master of Science (MSc) and other post-graduate science programmes at IIT, integrated Ph D courses at Indian Institute of Science (IISc), Bengaluru, along with other government-funded institutes. The eligibility criteria for JAM include having a bachelor’s degree and the exam is computer based.

Suraj, son of Arjun Yadav, had studied at Kota, considered a coaching hub in northern Indian state of Rajasthan, to prepare for the prestigious engineering exam conducted by the IIT but as he returned home, a dispute took place with the next door neighbor over petty issue leading to scuffle in April last year.

His neighbor Sanjay Yadav sustained injuries in the incident as a result of which he was admitted to a local hospital but he succumbed to injuries during the course of treatment.

Suraj along with eight of his family members were made accused in the case. Subsequently, he was arrested and sent to jail, dealing a blow to his academic dream. In jail, he found his all dreams shattered as he lost hope of ever focusing on his academic career in the companies of gangsters, ruffians and rapists.

But a sudden incident transformed his life. While he was feeling downhearted and depressed in his jail ward, the then jail superintendent Abhishek Kumar Pandey reached them and boosted the morale of prisoners with his motivational speech.

“Everyone has a dream. Please keep the dream alive to get success in your life. Never let them dying down, never,” the very speech by the jail superintendent just transformed his life.

Very soon, the prisoner met the jail superintendent and requested him to arrange for books, notes and other study materials to prepare for IIT test and the superintendent obliged him soon. Thereafter, he studied with full dedication in the jail and eventually managed to clear the IIT test.

“But for the motivational speech and all kinds of support by Pandey Sir, I wouldn’t have cleared the test. I don’t know how to thank him,” Suraj wrote this in his letter to his family members after he secured AIR of 54 in the IIT test.

Local sub-divisional officer Umesh Kumar Bharti said they are happy to know a prisoner performing so well in IIT exam. “He got 50.33 marks out of 100 and wants to study further,” the official said.

Suraj’s co-villagers are now praying for his acquittal in the murder case so that he could study further and serve the country. Suraj wants to become a scientist.

How “over-ambitious” Mukesh Sahani writes his own political disaster