Under fire from Opp, JD-U changes its slogan about Nitish Kumar 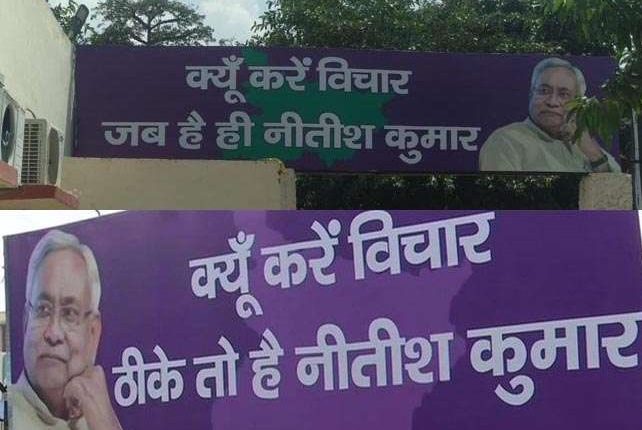 PATNA: The ruling JD-U in Bihar in a significant political move has changed its earlier slogan about chief minister Nitish Kumar, apparently succumbing to heavy criticisms from the Opposition parties.

The JD-U was compelled to change its poll slogan after its earlier slogan about Nitish Kumar came under heavy attacks from the opposition.

JD-U’s earlier slogan had said “Kyun karen vichar, thike to hai Nitish Kumar (why think of the alternative when Nitish Kumar is perfect).”

But the opposition parties found a major opportunity in it to target the chief minister looking for another term in office.

They especially had strong objections about the word “thike to hai”  mentioned in the slogan.

“By putting up this slogan, the JD-U has itself admitted that Nitish Kumar is a ‘kamchalau’ (workable) chief minister which is not acceptable to the people of Bihar,” the RJD attacked.

The other opposition parties too made similar reactions and targeted the chef minister. The pressures ultimately compelled the JD-U to replace its earlier slogan about Kumar.