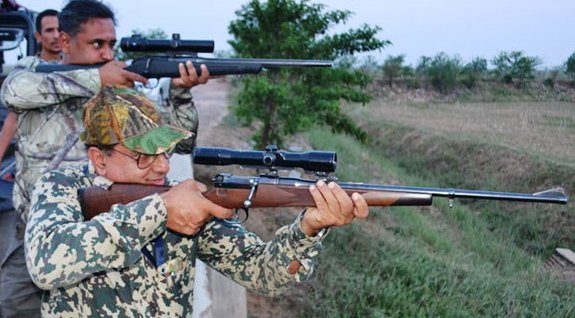 PATNA: Two Union ministers in the ruling Narendra Modi government at the centre have come face to face over culling of around 250 blue bulls, popularly known as “Nilgais”, in Bihar over the past few days.

Union Minister for Women and Child Development Maneka Gandhi is wondering over the Environment Ministry’s “lust for killing animals”.

“I’m shocked. For the first time, a massacre of this scale has been allowed. The Environment Ministry is writing to all states asking for list of animal whose killing should be allowed,” Gandhi, also an animal rights activist, told the media on Thursday.

The Environment Minister Prakash Javadekar, however, defended action of his department saying such permissions have been granted in the interest of farmers based on the recommendations of the state government.

“Such permissions have been granted on the recommendations of the state government. This is not a central government programme,” Javadekar replied.

He added, “When the state governments write to us about the farmers’ suffering due to crops damage by animals, only when the government grants such permission as it is in the existing law”.

The bitter war of words between two senior ministers in the NDA government broke out soon after the news spread that around 250 blue bulls, popularly known as “nilgais”, have been killed by a team of shooters in one of the biggest culling drive in the eastern Indian state of Bihar.

The blue bulls which are the largest Asian antelopes were shot dead in Mokama, Ghoswari, Pandarak and Barh blocks of Patna district over the past four days.

They have been killed for destroying the standing crops of the farmers. This part of the state is known as the “pulse bowls” of Bihar.

The shooters, however, spared the female blue bulls. More than 2,000 others were driven back to the nearby forests by a team of shooters from Hyderabad led by S Ali Khan.

Authorities say the animals often get attracted to the lush green fields in search of fodders but end up destroying the crops.

Bihar has now granted permission to the farmers to shoot the rampaging animals, alarmed at the growing menace.

The government has also announced to give compensation to the farmers at the rate of Rs 500 per cartridge used to kill the animals, apart from Rs 1000 for their burial.

Who is Deputy CM of Bihar? “Lalu ka beta”, says another topper