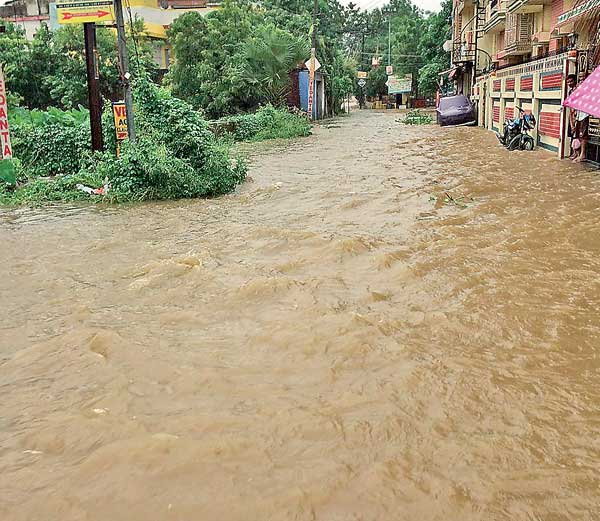 PATNA: A Hindu pilgrimage town of Gaya in Bihar has been flooded following torrential rains since yesterday, disrupting life, flight and train services.

Meteorological department authorities said the Gaya and its adjoining areas recorded 243 mm of rains in the past 24 hours, turning Gaya into a floating city. Authorities say continuing rains have broken the record of the past 70 years.

TV grabs showed the residents wading through waist-deep to shoulder-deep water or using makeshift boats to reach the safer areas.

The overall situation compounded after the flood waters mixed with drain waters entered hundreds of homes as the residents struggled to get their vehicles, households and other belongings out of the way of waters.

“Some of the areas have been worst affected as rain waters have entered many homes. We are deploying disaster management teams to help the residents,” the Gaya district magistrate Kumar Ravi told the media today.

Quite many trains had to be suspended or ran late as the waters flooded railway tracks. “Water logging on the tracks has badly disrupted movement of trains in the districts. The rains have been unprecedented,” a spokesman of east central railway Sandeep Kumar told the media today.

The torrential rains also led to cancellation of a few trains as runway remains flooded.

Rains also brought miseries to the neighbouring Buddhist pilgrimage town of Bodh Gaya which too got flooded.

Meanwhile, toll in the current floods touched 214 in Bihar today.

According to a latest report of Bihar Disaster Management Department sent to the Union home ministry, floods have affected around eight million population settled in 4,862 villages across 31 districts of Bihar, causing extensive damage to both life and property.

As per the report, the floods have damaged more than 24,000 houses and destroyed standing crops planted in over 308,000 hectares of land.