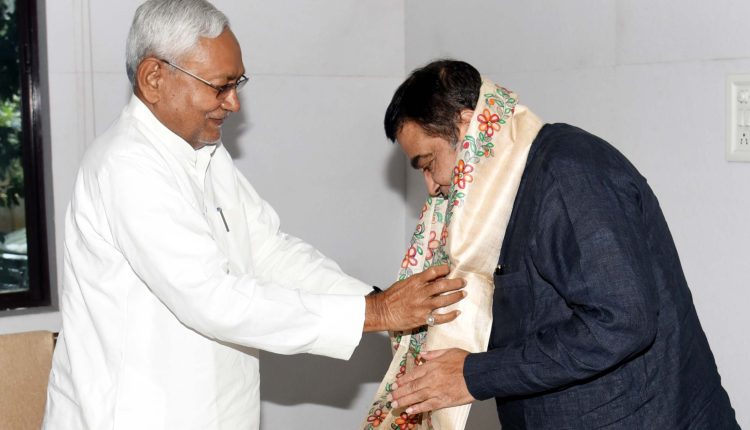 PATNA—After bouts of bitterness, the bonhomie! Top BJP ministers in the Narendra Modi government at the Centre now seem to be making a beeline at residence of Bihar chief minister Nitish Kumar in Patna in what is believed to be an attempt to end the prevailing rift.

In the past one month, at least three top BJP faces in the Modi cabinet have called on the chief minister, amply indicating his significance in the NDA.

Political experts were left literally surprised after Union Minister for Road Transport and Highways Nitin Gadkari drove straight to the residence of the chief minister shortly after landing at the Patna airport yesterday.

Although Gadkari had reached Patna to inaugurate the eastern flank of Gandhi Setu built over the Ganges in Patna, he went straight to the CM’s House and had discussion over tea before he completed the basic formalities.

Even more interesting scenes were on display during the inaugural function at the Gandhi Setu when the Union minister was seen heaping praises on the chief minister for the kind of initiatives initiated by the latter to improve infrastructure.

The development assumes much political significance in the sense that only last month, Kumar’s photographs were missing from the posters put up during the opening of Koeilwar bridge in Bhojpur district.

A couple of days back, Union Health Minister Mansukh Mandaviya called on the chief minister at his official residence here in what was widely publicized as a “courtesy call’.

The meeting took place on the second and final day of the Union minister’s tour of the state as part of which he also visited Vaishali, Begusarai and East Champaran districts to inaugurate/lay foundation stones of various development projects.

Last month, Union Minister for education Dharmendra Pradhan had a quiet meeting with the chief minister at the latter residence.

How the meeting was kept secret can be underlined from the fact that even the senior state BJP leaders were not aware about Pradhan’s visit to Patna and they came to know about this only after reading the media reports, reports said.

Pradhan is believed to have assured Kumar that he would continue as Bihar chief minister till 2025 and that the BJP won’t disturb the present NDA set-up in the state. The meeting followed in the light of the repeated demands by the state BJP leadership to replace Kumar with BJP leaders.

Informed sources said the BJP has now launched serious efforts to mollify the chief minister and restore normalcy in their relations amid serious differences between the two ruling allies over various issues, such as Caste based census, demand for granting special category status to Bihar and laws for population control and check conversion.

Analysts say the BJP wants to keep the chief minister in good humour to get his support for the upcoming Presidential polls and also out of fear that any further pressures on the chief minister could cost the ruling NDA government in Bihar.