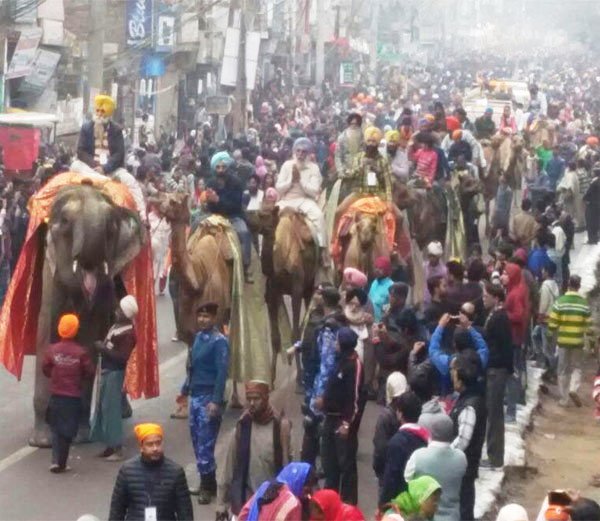 No. PATNA: Hundreds of thousands Sikh devotes from India and abroad are joining a colourful procession being taken on the streets of the Patna here today to commemorate the 350th birth anniversary of the 10th Sikh guru, Guru Govind Singh.

The procession or “Nagar Kirtan” which began from Gandhi Maidan will reach sacred Takht Harimandir Sahib. Several musical bands, apart from horses and camels are are joining the procession.

Reports said the devotees will cover the eight km-long distance by the night.

Authorities have made massive security arrangements in view of the large number of devotes joining the procession. Not only the plying of all kinds of vehicles has been banned but the cops have been deployed all along the route in adequate strength to ensure smooth passage of the procession.

Till now, more than 400,000 devotes have landed in Patna. Quite many Sikh devotees in batches have arrived from USA, Canada, UK, Australia, China, Mexico and Italy.

A centre of attraction is a delegation of nearly 125 American Sikhs led by Bibi Inderjeet Kaur Yogi.

Elegantly dressed in traditional Sikh attire, this delegation comprising men, women and children of American origin is fondly greeted and thronged by the devotees wherever they go.

This delegation is affiliated to ‘Sikh Dharma International’ founded by the great Sikh scholar late Harbhajan Singh Yogi in USA around for decades ago for the propagation of Sikhism in every nook and corner of the world.

Apart from them, quite a number of political leaders such as former Punjab chief minister Captain Amarinder Singh, current CM Prakash Singh Badal and others have reached Patna to be a part of this historic moment while Prime Minister Narendra Modi will be reaching Patna tomorrow.

The state government has made elaborate arrangements for the visiting devotes.

Guru Govind Singh was born on December 22, 1666, to ninth Sikh Guru, Guru Tegh Bahadur, and Mata Gujri. He was anointed the supreme leader of the Sikhs at the age of nine, becoming the last of the Sikh Gurus.