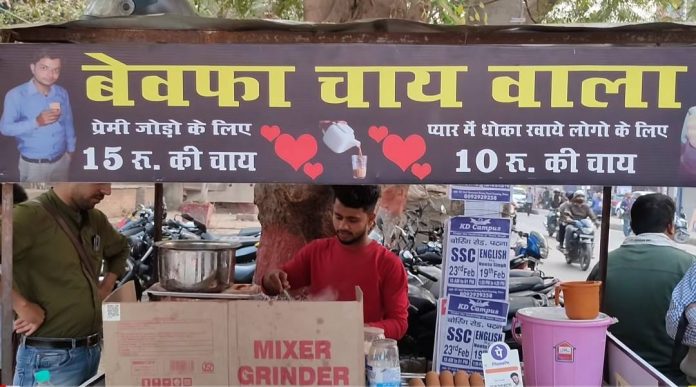 PATNA—A tea stall in Bihar capital is offering attractive discounts to those who were ditched in love by the girl friends in what is being described as the first such business in the Indian state.

The tea stall nicknamed “Bewafa Chai Wala” running in the busy Boring Canal Road locality of Patna charges Rs10 for a cup of tea from persons ditched in love against Rs15 from general love birds enjoying love of the life for the same cup of tea.

For commoners, however, the same cup of tea is offered for only Rs7. The owner has formally placed the different rate chart on his tea stall which is attracting curious passersby.

“I had fallen in love with a girl in 2015 but she ditched me in 2000 after five years of affairs which left me mentally shattered. So, I decided to open the tea stall named “Bewafa Chai Wala” to alert youngsters about this love,” said Sandeep Kumar.

Sandeep has opened the tea shop in partnership with Ankit Kumar who too has had similar experiences in love. Currently, this shop is having roaring business.

The stall is making waves in the state capital for its unique name with youngsters rushing to the shop to have a cup of tea unmindful of different rates for the same beverage.

Especially, this stall is drawing good crowd of lovers ditched by girl friends since it offers discount to this class. The stall was opened during the Valentine’s week last month.

The tea is served in earthen cups.