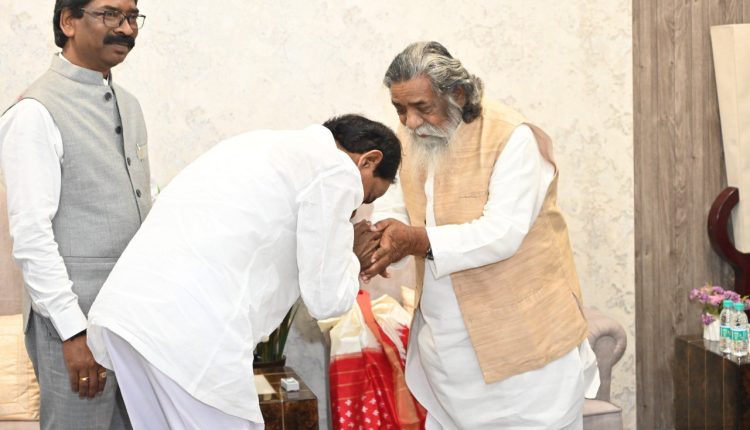 PATNA—Telangana chief minister K Chandrashekhar Rao seems to have gone into overdrive to form a third front at the national level as an effective alternative to Prime Minister Narendra Modi ahead of 2024 LS polls with the mainstream Congress battling internal crisis.

Under part of this strategy, Rao today reached Ranchi to meet Jharkhand chief minister Hemant Soren who heads the Grand Alliance government in the state. Although he landed in the Jharkhand capital to offer financial assistance to the widows of Galwan valley martyrs, he talked politics during his meeting with the chief minister Soren and his parliamentarian father Shibu Soren. Although what transpired between them is not officially known, informed sources said they discussed national politics.

Rao chose the issue of financial assistance to the families of Galwan valley martyrs to reach out to Sorens. One of the soldiers Kundan Ojha killed in Galwan valley during skirmishes with the Chinese troops was the bodyguard of colonel Santosh Babu, a resident of Telangana who also was martyred. It was to hand over the cheque of Rs10 lakh to each martyr that Rao reached Ranchi and later met Sorens to chalk out further political strategy.

Last month, Rao had met Maharashtra chief minister Uddhav Thackeray and also NCP chief Sharad Pawar. Prior to that, he held meeting with Bihar opposition leader and RJD legislator Tejashwi Yadav. The seriousness of Rao can be underlined from the fact that Rao had sent a chartered flight to Patna pick up Tejashwi for a crucial meeting in Hyderabad. The meeting was held in the second week of January.

“There is complete political vacuum at the national level in the opposition camp. The Congress is battling its own internal crisis while the opposition is totally divided. So, the formation of anti-BJP, anti- Congress third front looks a possibility if Rao works sincerely,” commented political analyst Professor DM Diwakar, former director at Patna-based AN Sinha Institute of Social Studies.

According to him, Rao should first try to get every prominent and emerging force in the opposition, such as Akhilesh Yadav and Ashok Gehlot, to make an effective opposition without getting into the issue of who should lead the front.

However, Diwakar also feels that the prime ministerial ambition could be yet another factor that has left the opposition leaders active. It is worth mentioning here that West Bengal chief minister Miss Mamata Banerjee too has been trying hard to form a formidable front to take on Modi.

Political experts say it’s the golden opportunity for Rao to bring opposition on a single platform. Earlier Bihar chief minister Nitish Kumar too enjoyed that opportunity and had emerged as a formidable prime ministerial candidate to take on Prime Minister Modi.

However, he lost this opportunity by deciding to return to the NDA and form his new government with the support of the BJP which was voted out by the masses in 2015 Bihar assembly polls. The Nitish Kumar-led Grand Alliance comprising the RJD, JD-U and the Congress had won 178 seats in 243-member Bihar assembly against 58 seats won by the NDA.