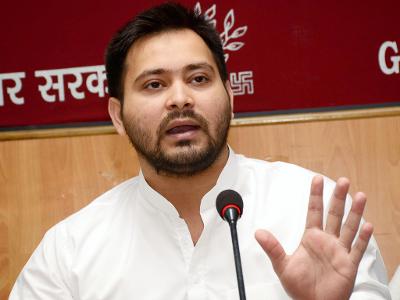 PATNA: In another sign of deepening crisis in the ruling grand alliance government in Bihar, deputy chief minister Tejashwi Yadav today skipped a meeting he was scheduled to attend with chief minister Nitish Kumar.

As per reports, Tejashwi was to attend a function to mark Vishal Yuva Kaushal Divas but he skipped the function indicating a clear sign of strain in relations between two partners.

As Tejashwi did  not arrive, his name plaque was first covered with clothes before being removed finally.

The development indicates the two partners are heading for collapse.

The JD-U led by Nitish Kumar has sought resignation of Tejashwi after he was named an accused in a corruption case by the CBI.

It also asked the RJD chief and his son to declare their property details in public as being demanded by the opposition.

The RJD headed by Lalu Prasad, however, has declared Tejashwi will not resign claiming the filing of the case is part of a political conspiracy.

“There is no question of Tejashwi resigning. Also, we will not declare our properties,” declared Prasad on late Friday evening.

Nitish Kumar: The man perfectly caught between the ‘devil’ and the ‘deep sea’