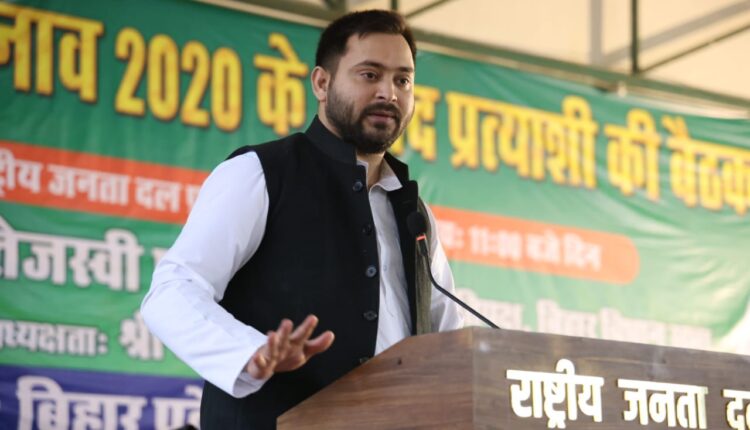 “There is just no questioning of allowing entry of Nitish Kumar into the Grand Alliance. I have already told the national president that there is strong anger against Nitish Kumar among common men,” Tejahwi told the media on Saturday.

He said there was no question of making any political compromise with the JD-U of Nitish Kumar. “But one thing is certain. This government will not last for long and so we are prepared for mid-term polls which could be held any time,” he claimed.

Tejashwi said Bihar had suffered massive losses due to NDA government which has been in power for the past 16 years.

“This government is a curse for the state since it has created army of unemployed youths,” Tejashwi alleged and further charged the NDA with “stealing the people’s mandate”.

The “clarification” comes after a Janata Dal United (JD-U) legislator claimed Tejashwi would replace Nitish Kumar in the next six months.

“Nitish Kumar is a dabang (audacious) chief minister but he will quit the throne in favour of Tejashwi Yadav in the next six months,” JD-U legislator Gopal Mandal had told the media on Thursday.

Explaining further, he said: “Within next six months, Tejashwi will become the chief minister of Bihar.” Now, Mandal has withdrawn his statement saying he was “misquoted” by the media.

Mandal represents Gopalpur seat from Bhagalpur district in Bihar assembly and has been infamous for making controversial statements.

Earlier this week, Mandal kicked up a fresh controversy when a video of his went viral in social media. In the video, he claims to be ensuring defeat of the BJP candidate from Bhagalpur town since he appeared more arrogant.

The JD-U legislator expressed anger over the way BJP candidate didn’t greet him while they were sharing dais with Prime Minister Narendra Modi at an election rally.

“The result was that the BJP lost one of its pocket boroughs,” he claimed.