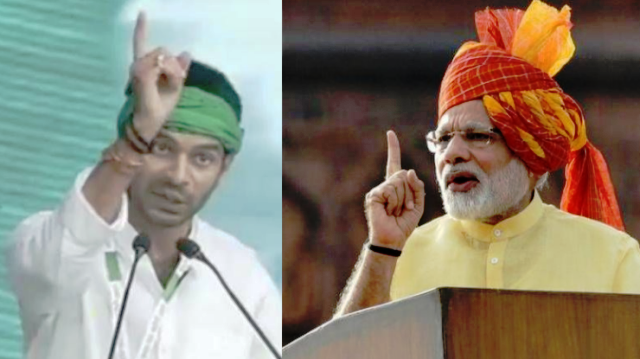 Tej Pratap who happens to be the eldest son of RJD president Lalu Prasad has threatened to “skin” the PM if anything happened to his father in the aftermath of withdrawal of NSG security cover to him.

Union minister of health and family welfare Ashwini Kumar Choubey demanded that the man should be jailed for his nuisance.

“He should be declared “mentally sick or bankrupt” and sent to the jail,” he demanded.

“Such kind of remarks towards a Prime Minister is highly objectionable and condemnable. The people will teach him a lesson in the coming elections,” said deputy chief minister Sushil Kumar Modi of the BJP.

“He looks to be mentally unstable and needs treatment by a psychiatrist. Laluji should first get him properly treated before allowing him to attend the current session of the Bihar assembly,” remarked Pandey.

Bihar youth leader and national convener of Yuva Chetna, a social organization, condemned the statement of Tej Pratap and asked him to tender public apology for such remarks.

“He has been constantly using such language against the Prime Minister. It appears the Lalu family has failed to digest PM Modi who comes from the socially backward background,” Singh said, asking the RJD president to explain as to whether he wants to make his son a leader or a criminal.

He alleged Lalu Prasad family has got terribly disturbed after losing power in the state and is making “rubbish” statements.

In a related development, a senior BJP parliamentarian Parvesh Verma has filed a complaint against Tej Pratap with the Parliament Street police station in New Delhi for his remarks against the PM.

GST collection is more than Rs83000 crore till Nov 27: Ministry of Finance