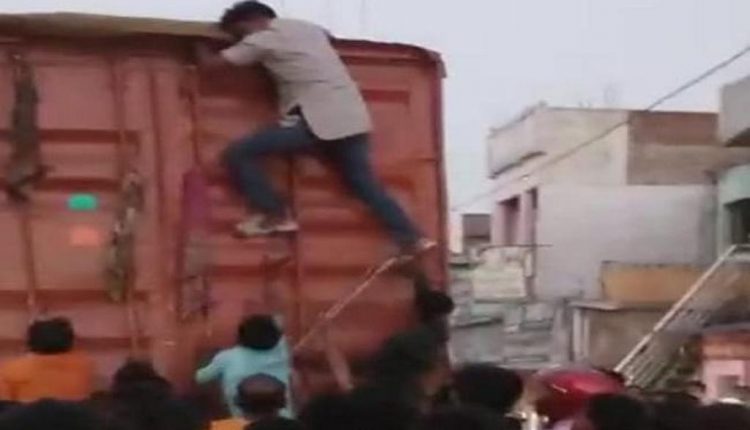 The container being raided by the alleged cow vigilantes IMAGE COURTESY: PRABHATKHABAR.COM
274
Share

PATNA: Alleged cow vigilantes blinded the driver of a container carrying animals in Bihar. The cattle were reportedly being transported to Bangladesh.

The incident took place in Siwan district of Bihar on Saturday evening.

As per media reports, a police team stopped a container on Saturday evening apprehending it contained banner liquor.

However, once the police team peeped inside, they found some 50 cattle loaded on the container.

As the news spread, the alleged cow vigilantes rushed to the spot and the container under theri control.

Subsequently, they badly assaulted the truck driver and blinded him before freeing the cattle as the cops remained a mute spectator before the mob, as per reports.

Witnesses said somehow the police rescued the driver and admitted him to a local hospital.

“We are investigating the case and trying to find out where the cattle were being transported,” local additional district superintendent of police KK Mishra told the media on Sunday.

Attacks by cow vigilant groups have recorded an alarming jump in the past three years in India.

According to a report published in Bloomberg, at least 44 people—36 of them being Muslims—have been killed by the cow protection groups in India in the past three years.