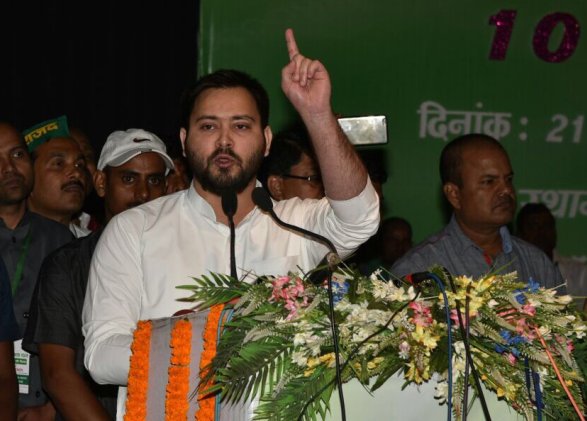 PATNA: Hours after the TDP pulled itself out of the Narendra Modi government at the centre, the key opposition in Bihar, the RJD, has dared the chief minister to take a lesson from his AP counterpart and react over Centre’s failure to grant special category status to the state.

However, Kumar has maintained silence over the issue, giving further ammunition to the opposition to hit out the former.

“Bihar has failed to get special category status despite the same government in the state and at the Centre. Will Nitish Kumar sit on dharna over the issue now? If he doesn’t, then it will simply mean his previous protests over the issue was pure ‘nautanki’ (drama),” Leader of Opposition in Bihar assembly and senior RJD leader Tejashwi Yadav said today.

He dared Kumar to speak up like AP chief minister N Chandrababu Naidu and pull out from the NDA. “Nitish Kumar is a spineless chief minister. He must instantly walk out of the NDA if the centre rejects his demand for grating special category status to Bihar. Show your courage at least a bit uncle…I’m with you over the issue,” Tejashwi challenged.

He alleged the chief minister has mortgaged the rightful demand of special status to Bihar in lieu of special bungalow in Delhi and Z plus security for himself. Nitish Kumar must apologise to the people of Bihar,” he said.

Tejashwi’s father Lalu Prasad too launched vitriolic attacks on the chief minister for his silence over the issue.

“Why Nitish not asking his boss to accord Special Status to Bihar? PM Modi had promised Special Status to Bihar in March 2014 Loksabha election rally at Muzaffarpur. Nitish must play that speech recording in front of PM. For personal gains Nitish surrendered Bihar’s benefits,” Prasad tweeted today, launching blistering attacks on Kumar’s move to “bury” the issue.

Strangely, Kumar had been constantly raising this issue since he came to power in 2005. He raised this until last year but “buried” it soon after returning to the NDA camp in July last year.

For nearly a decade, the JD-U chief kept the issue of granting “special category status” to Bihar alive, by raising it at every forums, party meetings, public rallies and even at the Inter-State Council meeting held in New Delhi in July 16 last year.

His seriousness for the demand is underlined from the fact that he held month-long Adhikar rallies across Bihar before holding a massive rally at Patna’s Gandhi Maidan on Nov 4, 2012. This was soon followed another rally in Delhi on March 17, 2013.

What was interesting the chief minister and his entire JD-U had celebrated “Diwali” and described it as their ”victory” after the Raghuram Rajan panel made a case for ending “special category” criteria for providing additional assistance to the poorest states in September 2013 while identifying Bihar as the second most backward states in the country. Given this background, Kumar’s silence over the issue indeed raises questions over his intention.

Manjhi-led HAM pulls out of NDA, to join Grand Alliance