What Sourav Ganguly missed by a whisker, Virat Kohli hits with a win! 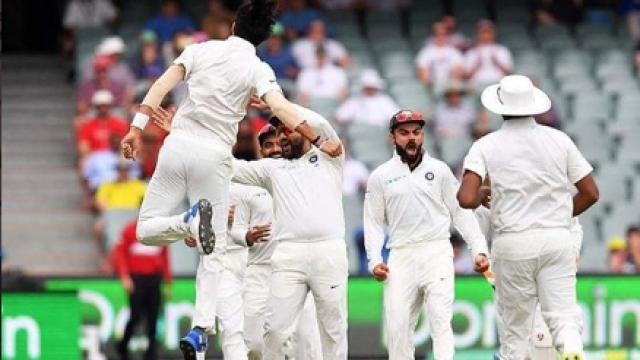 Sydney: Former Indian cricket captain Sourav Ganguly may have missed the creation of a history 15 years ago due to Steve Waugh’s rock-solid batting, but present skipper Virat Kohli did not give a chance to the opponents in 2019.

Five years after taking up his Test captaincy against the same team, Kohli scripted a history by beating a weak Australia 2-1 in the longest format of the sport.

Though the fourth and final Test ended in a draw, India’s lead in the series helped them emerge victorious for the first time in Australia, a feat which was not achieved even by world cup winning captain Mahendra Singh Dhoni.

However, Kohli, is not the sole star of the series though he hit a ton against the hosts.

Cheteshwar Pujara, who is now compared with ‘The Wall’ Rahul Dravid for his immense patience on pitch, has been declared man of the series. Pujara, who scored his career’s 18th Test century in Sydney, slammed three tons in the high-voltage Border Gavaskar Trophy.

In 2003-2004 tour, India were on the verge of winning but then Australian skipper Steve Waugh played a marvelous knock in his last Test innings to deny Ganguly a series victory. Eventually the series had ended in a draw 1-1.

What Kohli said after landmark victory?

After winning the series, Kohli termed this moment as an “emotional” one.

“This is the proudest moment of my career,” Kohli said during a press conference.

“This moment is more emotional for me because I have seen how difficult it is to win here. We badly wanted to win a series away from home. We as a team feel absolutely complete now,” he said.

He said his team has achieved something which none has done before.

President Ram Nath Kovind congratulated the Indian team by tweeting, “Congratulations to @imVkohli and his team for reaching one of Indian cricket’s final frontiers and winning a test series in Australia for the first time. Gritty batting, marvellous fast bowling and a fine team effort has done us proud. Let’s make a habit of it!”

Veteran actor Anupam Kher tweeted, “Dear ⁦@imVkohli⁩ and the great #IndianCricketTeam Zindabad. You are the bestest. Thank you for this win. Jai Hind and Jai Ho.
India win a Test series in Australia for the first time in history”

Cricket commentator Harsha Bhogle said: “Excellent reward for old-fashioned test cricket batting for @cheteshwar1 and a break out year for @Jaspritbumrah93. Thought Virat Kohli was much more relaxed than I have ever seen and that bodes well for his captaincy.”

India’s star spin bowler Harbhajan Singh tweeted, “Proud of you guys..Well done Team India for winning the test series in Australia.. congratulations @cheteshwar1 for winning MOS u been a backbone of indian batting line up.. keep it up @BCCI bowling wise @Jaspritbumrah93 has been phenomenal..love ur work ”