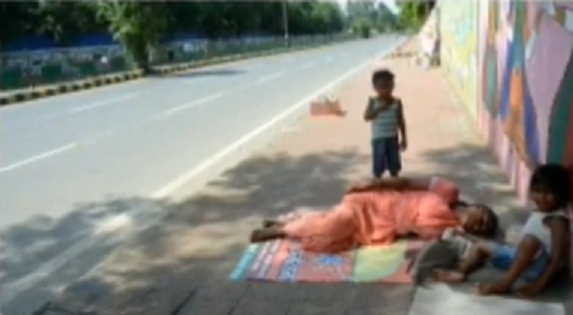 PATNA—Bollywood actor Sonu Sood has finally come to the rescue of a shelter-less woman who was found sleeping on a deserted pavement in Patna with her two little children the other day.

“The family will get a shelter very soon,” Sonu has promised.

The poor woman who has lost her husband came to Patna from Varanasi in Uttar Pradesh a year back in search of livelihood with two little children. She had accompanied her brother-in-law.

She was running a roadside dhaba (hotel) to support her family but it got shut due to lockdown, leaving her family jobless.

Ultimately, she rushed to the Patna junction to catch to return her home by a train. After being told train services had been suspended due to lockdown, she was returning from the station looking for some accommodation for her children when her bag containing clothes was stolen.

Since then the hapless woman had been sleeping on the footpath of Patna with her children, awaiting ‘good time’.

Someone clicked the photograph the hapless woman and put on the social media which went viral.

Ultimately, this photograph reached Sonu who is now making all effort provide her shelter and help the woman in distress.

Family shocked after woman declared Covid-19 positive without any test