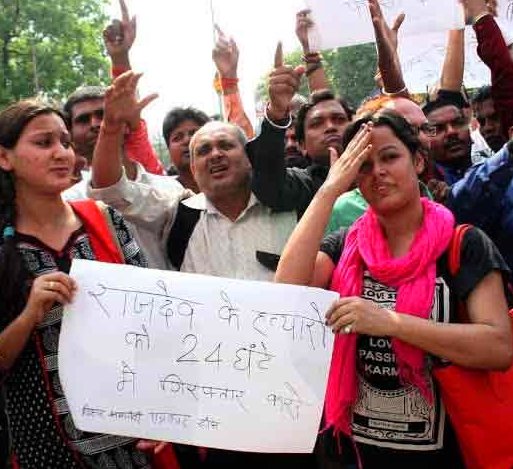 PATNA: The mortal remains of slain journalist Rajdeo Ranjan were consigned to flames in his home town Siwan today. Ironically, today was his marriage anniversary and had he been alive, he would have celebrated his 17th anniversary today.

Ranjan who was long associated with prominent Hindi-language Hindustan was married on May 14 1999, and he was reportedly busy preparing to celebrate his marriage anniversary but was sadly denied the chance to enjoy the happy moments, as per media reports.

Very pathetic was the condition of Ranjan’s wife, school teacher, who was showing every mourner the new ‘sari’ which his husband had given her as a gift on her marriage anniversary.

The victim’s family has demanded a CBI probe into the killing, apprehending ‘political conspiracy’ behind it. The slain journalist had been frequently reporting on crime and politics from the land which is known in local circles as the “fiefdom” of jailed RJD politician Mohammad Shahabuddin.

The police are investigating the case from various angles.

The police today detained two persons in connection with the killing of a senior journalist Ranjan who was murdered by unidentified assailants in Siwan on Friday evening. Ranjan was working for prominent Hindi daily Hindustan.

Bihar chief minister Nitish Kumar has expressed shock over the incident and directed the police for stern action against the criminals. “The culprits will not be spared,” Kumar told the media today.

However, the opposition launched massive attacks on the chief minister for failing to maintain law and order situation in the state.

“Nitish Kumar should explain to the masse if this is the ‘rule of law’? The ongoing spate of killings has refreshened the memories of Jungle Raj once again,” senior BJP leader Sushil Kumar Modi alleged.

“The people are being killed in Bihar and the chief minister is on Bharat darshan,” mocked Hussain.

Another senior leader Nand Kishore Yadav too condemned the killing and expressed anguish over JD-U’s claim that there is a rule of law in Bihar.

“A ‘sushasan’ mean preventing crimes, and not arresting the criminals post the incidents have been committed,” Yadav explained.

Ranjan, a senior journalist having more than two decades of experience in journalism, was killed by unidentified gunmen this evening—the second killing of journalist within 24 hours in the eastern India.

The victim was returning home after work when motorcycle-borne criminals shot him from point blank range near the Siwan railway station.

He was instantly rushed to a local hospital but the doctors declared him brought dead. A fearless journalist Ranjan, was hit on the head and neck.

Police said the reason behind his murder is not clear. The incident triggered a wave of protests by media persons in Bihar.

Siwan is the homeland of incarcerated RJD politician Mohammad Shahabuddin.

This is the second incident of murder of journalists within the past 24 hours. Last evening another journalist, was shot dead in Chatra district of neighbouring Jharkhand.

Here in the case too, the victim who worked for a news channel was returning home on his bike when the criminals sprayed bullets on him, killing him on the spot. The reason behind his killing is not known.

Journalists remain the soft targets of attacks across the globe.

According to a latest report of “Reporters Without Border”, the media watchdog, a total of 110 journalists were killed in 2015 while doing their work for unclear reasons with India figuring among three top dangerous countries for journalists.

As per the report, as many as nine journalists lost their lives last year while discharging their duty in India, pushing it ahead of both Pakistan and Afghanistan.

Image Caption: Journalists protesting against the murder of their colleague Rajdeo Ranjan

Journalist Rajdeo Ranjan: A watchmaker’s son who became a ‘watchdog’