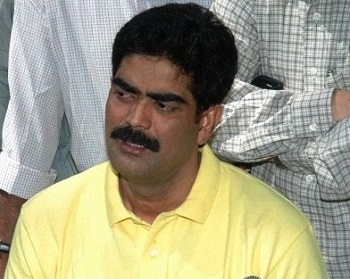 PATNA: RJD politician Mohammad Shahabuddin is passing sleepless nights at his new abode at special central jail in Bhagalpur where he was shifted on Thursday after reports of holding “courts” in his home town Siwan jail.

The local media has reported Shahabuddin is battling mosquitoes in his cell where he has been kept in total isolation.

Reports said one of the RJD lawmakers tried to give a mosquito net to his jailed leader but the jailed refused didn’t allow. As a result of which he is left to drive away an army of hovering mosquitoes most of the time.

His many other facilities, reports said, too stand heavily curtailed this time. At presently, he has been denied bottled water as well as pillow to rest.

Informed sources said he has been given three blankets right now—one to use as a bed, one to cover himself and the other to use as a pillow.

The food too is being supplied as per the jail manual even as he has been prevented from interacting with the general prisoners.

Reports said he asked the jail authorities to transfer him to general prisoners’ ward citing myriad problems in his cell but his request was not entertained.

Angry Shahabuddin even refused supper on Thursday night incensed at the kind of “treatment” being meted out to him this time.

Shahabuddin was shifted from Siwan jail to Bhagalpur central prison on Thursday in connection with the journalist murder case.

The politician facing more than 50 criminal cases was shifted to high-security Bhagalpur jail under heavy security arrangements. He has been lodged in a highly protected egged-shaped cell in block three of the special central jail.

His shifting began shortly past midnight and he was brought to the new location by road. He reached Bhagalpur on Thursday afternoon.

The sudden shifting is being linked to the recent killing of the Sewan journalist Rajdeo Ranjan.

Reports said the order to shift him to Bhagalpur prison was issued late Wednesday night shortly after some cell phones, knives and other objectionable items were recovered from the Siwan jail where Shahabudidn was lodged.

The needle of suspicion moved towards the Siwan don after quite many of his associates have been arrested in connection with the cold-blooded killing of the journalist which evoked national outrage.

The shifting comes hours after the police raided the Siwan jail on Wednesday and conducted intensive searches there, including the cell where Shahabuddin was lodged.

Reports said the police raided the jail after getting some certain leads in the case.

The local media has reported the contract killers who were present at the place of occurrence some three hours before the killing had received as many as 36 calls from the jail.

The report added the killers contacted someone inside the jail soon after the killing after which their conversations got stopped.

Reports said the raiding team also searched the ward of Shahabudidn during the extensive search operation.

As per reports, the police have recovered eight cell phones, two knives and other objectionable documents from inmates during the search operation.

Taslimuddin asks Lalu to break alliance with JD-U, says Nitish Kumar is not even fit to be a Mukhia