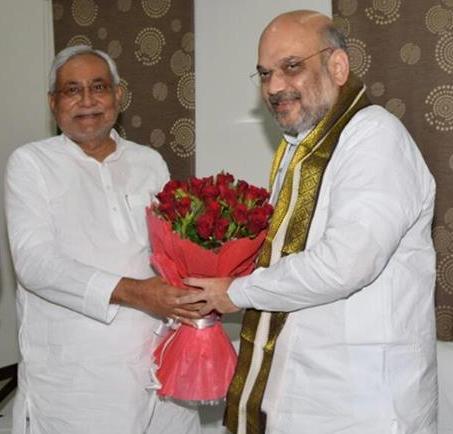 PATNA: BJP president Amit Shha on Thursday sought to end the differences in the ruling NDA by declaring that the next Bihar elections would be fought under the leadership of JD-U president Nitish Kumar.

“We will fight the next elections under the leadership of Nitish Kumar,” Shah told a rally in Bihar on Thursday.

He asserted that BJP-JD-U alliance was intact in Bihar and that both the parties would go to polls together.

The BJP chief made these announcement at a rally held in Vaishali to seek support for Citizenship act which has triggered nation-wide protests, prompting the party leadership to launch mass awareness programmes in the country.

The announcement becomes much significant in the light of continuing conflicts between the two partners over seat-sharing, NDA’s face and also the recently passed Citizenship Act which the JD-U had supported in the Parliament.

The chief minister Nitish Kumar himself had told the Bihar assembly on Monday that he was open to debates over issues like Citizenship act, NRC and NPR.

Prior to him, party vice-president Prashant Kishor had strongly opposed the citizenship act while also announcing that NRC won’t be implanted in Bihar.

Experts say the BJP was compelled to accept Nitish as the NDA face for Bihar as it didn’t want to take further risks and lose another state after Maharashtra and Jharkhand.