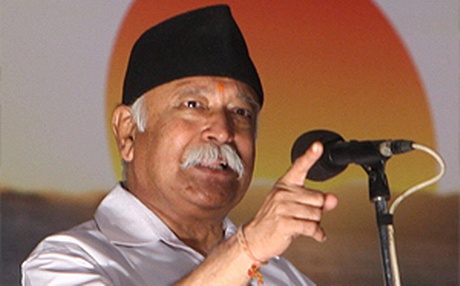 The RSS chief has visited the politically-sensitive state thrice in the past three months since the chief minister Nitish Kumar walked out of the ruling Grand Alliance to form new government with the opposition BJP in July last year.

Today again, Bhagwat arrived on a 10-day visit to the state. Reports said during his stay, the RSS chief will hold meetings with farmers, farm activists and cow-breeders in Muzaffarpur and also attend various programmes.

A RSS functionary said the frequent visits by Bhagwat have boosted the membership drive launched by the organization in the past few months.

However, the selection of Muzaffarpur, known as the “political capital of Bihar, assumes much significance given the fact that the BJP fared badly in the northern region in the last 2015 assembly elections.

The NDA led by the BJP suffered humiliating defeat in the last assembly polls with the coalition winning only 58 seats in 243-mmeber Bihar assembly.

The BJP alone could bag a paltry 53 seats and was mandated to sit in the opposition. It’s another matter that the BJP has now come to power, thanks to the “second about-turn” by JD-U chief Nitish Kumar in the past four years.

It’s worth mentioning here that the NDA government has given due focus on rural economy and agriculture in the current financial year’s budget.

Given this background, RSS chief’s move to visit the rural areas and interact with the farming community people assumes much significance.  The BJP hopes Bhagwat’s visit would significantly improve the chances of the party in the next elections.

The RJD, however, has reacted bitterly to the RSS move and alleged Bhagwat was coming to sow seeds of hatred in the state for political gains.

“Mr Bhagwat is coming to sow seeds of hatred in Bihar and reap political harvest. The RSS claims itself to be cultural organisation but it does everything except culture,” remarked RJD’s chief spokesperson Manoj Jha.

Another RJD leader and Bihar opposition leader Tejashwi Yadav said the RSS chief was paying frequent visits to Bihar to “feel pulse of voters” in the aftermath of jailing of RJD chief Lalu Prasad in fodder scam.

“They are planning to conduct elections much ahead of schedule but they wouldn’t gain whenever they go for it. The people of Bihar are not going to be befooled this time,” said Tejashwi who served as the deputy chief minister in the previous government.

Last month, the RSS chief had paid a visit to the Darbhanga district. During this tour, he again had voiced concern over the plight of the farmers adding the prosperity of the country was directly linked to agriculture. He had also favoured organic farming and cattle rearing saying even Muslims are not against “cow protection”.

Earlier in October last year, Bhagwat had visited Bhojpur district to participate in a yajna which chief minister Kumar had also attended but at different time.