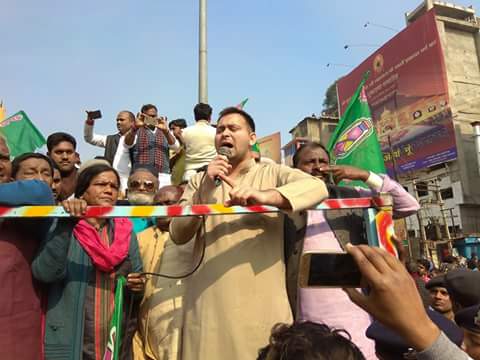 PATNA: The dawn-to-dusk bandh called by the RJD crippled normal life in Bihar. The call for bandh had been given to protest the new small minerals policy of Nitish Kumar government.

While vehicular traffic remained off the roads, the most of the schools remained closed.

At some places, the ambulances were seen getting caught in the traffic jams although the RJD had announced not to disturb them.

In Patna, a large number of RJD leaders and party workers led by leader of opposition in Bihar Assembly Tejaswi Yadav took out a protest march, shouting slogans against the government.

“The new mineral policy of the state government has badly affected the poor class. Instead of ending poverty, the government as such is eliminating the poor itself and we can’t be mute spectator to all these,” Tejashwi told the media today.

The Congress, an old ally of RJD, stayed away from the shutdown but the Sharad Yadav faction of the JD-U extended their full support to the Bandh call and its leaders and workers staged protest march in Patna and other parts of the state.

The ruling JD-U, on the other hand, termed the bandh as “meaningless” serving no purposes.