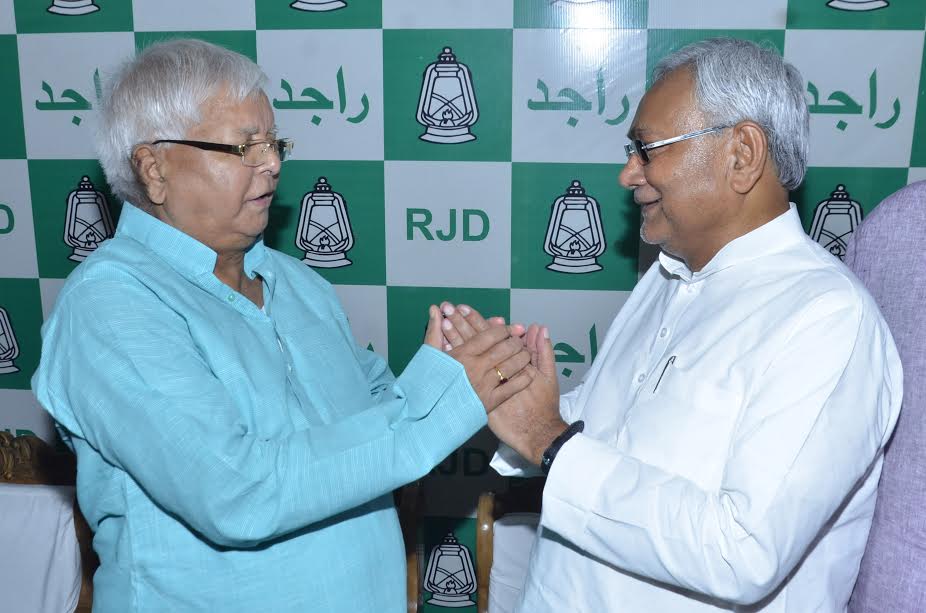 PATNA–Both Rashtriya Janata Dal (RJD) president Lalu Prasad and Janata Dal United (JDU) chief Nitish Kumar have now completed 15 years in power each. The million-dollar question now being hotly debated in the political circles is if Nitish’s regime was anymore different from Lalu in matter of governance. A close analysis of facts and incidents shows both the regimes bear striking semblance!

Lalu had come to power in 1990 and despite facing several hurdles on his way ruled Bihar for 15 year—while he himself ruled Bihar for seven years, for the remaining period, his wife Rabri Devi remained on the throne.

Similarly, Nitish Kumar backed by the Bharatiya Janata Party (BJP) came to power in November 2005 and since then he has been on the saddle. For close to eight years, the BJP remained his trusted partner but after June 2013, Nitish Kumar has switched sides and diluted party’s ideology too frequently to stay in power.

Political experts say tenures of both the leaders cannot be compared. If Lalu gave voice to the poor and the unprivileged, and empowered them socially, Nitish has given them economic empowerment. During Nitish’s tenure, a number of roads, bridges and flyovers were constructed and now anyone can reach Patna within six hours from any parts of the state. So, this could be described as a major achievement the of Nitish government.

But so far as the crime and corruption are concerned, there has not been very much difference between them. See the striking similarity between the two:

Law and order: The law and order remained the issue of serious concern during the RJD regime headed by Lalu Prasad and his wife Rabri Devi. Especially caste massacres dominated the RJD regime as the bloody battle of attrition between Dalit-backed Maoists and the Ranvir Sena, private army of the Upper Caste Bhumihar landlords saw blood spilled over the state and the government battled hard to restore peace.

One of them was Laxmanpur-Bathe massacre in central Bihar’s Jehanabad district in which as many as 58 Dalit villagers, many of the women and children, were gunned down in cold blood by Ranvir Sena. What was strange in most of the massacres in which Dalits were killed, all the accused persons got acquittals from the court for lack of evidence. If Lalu failed to protect lives of the poor, Nitish government failed to deliver justice to the victim families as all the accused persons walked away with acquittals as Nitish police didn’t show interest to collect evidence, many allege. See the list:

On the other hand, Maoist too carried several killing operations, such as Bara in Gaya and Senari in Jehanabad in which Upper caste Bhumihar members were killed.

Although no major massacres took place during the Nitish regime except for one at Nalanda and another at Khagaria, yet law and order situation became a major headache for the government in the later part of his regime as Nitish remained too busy changing partners to stay in power. The whole problem began after June 2013 when he broke alliance with the BJP.

The Muzaffarpur Balika Grih incident in which at least 34 girls were allegedly gang-raped by the care home staffs and outsiders amplly exposes the state of governance and rule of law claim by the Nitish government. The whole incident came to light after the Tata Institute of Social Science in its report highlighted the shocking detail.

Two years after the incident came to light, the culprits have been arrested and awarded punishment by the court. However, the social activist Nivedita Jha who brought the matter to the court is not happy with the judgement. According to her, the real conspirators are still at large.

At presently, bank loots, road robbery, murders, kidnapping and rapes have become a matter of serious concern and the authorities have failed to check them.  Especially, the incidents of kidnapping, rape, theft and road robbery have become too alarming. The list compiled by the Bihar police is self-explanatory.

Corruption: Corruption remained another major issue during the RJD regime. Nothing better can explain the multi million-dollar fodder scandal in which Lalu himself is serving jail term. Of the four fodder scam cases registered again Lalu, he has been convicted in three so far.

But Nitish regime too did not remain free from scandals as well. The worst among them is Srijan scam involving fraudulent transfer of government money to the bank account of an NGO called Srijan. While fodder scam was only worth around Rs950 crores, Srijan scam is said to be involving over Rs2,500 crores, indicating the gravity of the situation. After Srijan, another major scandal that took place during Nitish regime was toilet scandal.

Image factor: Lalu has often been blamed for promoting corruption and sheltering criminals in the party. But Nitish is no exception too. A number of politicians with criminal background have got place in the Nitish cabinet.  Apart from this, a number of criminal-politicians still exit in the JD-U.  At some point of time, controversial politicians such as Anant Singh, late Mohammad Taslimuddin and Ranbir Yadav too worked for Nitish.

What is classic, Nitish had revolted against Lalu in 1994 over twin issues of corruption and Jungle Raj but very ironically, the man later joined hands with Lalu s arch-rival and formed government with the RJD support in 2015 after his political existence appeared at stake. Political observers question this brand of Nitish morality.

Party ideology: Lalu’s track record has been far better than Nitish as far as his political ideology is concerned. He founded the RJD on the principle of secularism which he still follows strictly without any vacillation from his stand. He has not joined hands with the BJP, often branded by the Opposition as “communal”. In sharp contrast to Lalu, Nitish has been frequently changing his party stands. Nitish strongly supported the BJP in the Parliament over abrogation of Article 370, banning Triple Talaq and then passage of the Citizenship (Amendment) Bill—the issues which the JD-U had kept on opposing tooth and nail in the past.

It’s now easy for the readers to judge the two leaders—Lalu and Nitish!

(The author is a senior political journalist based at Patna, India)