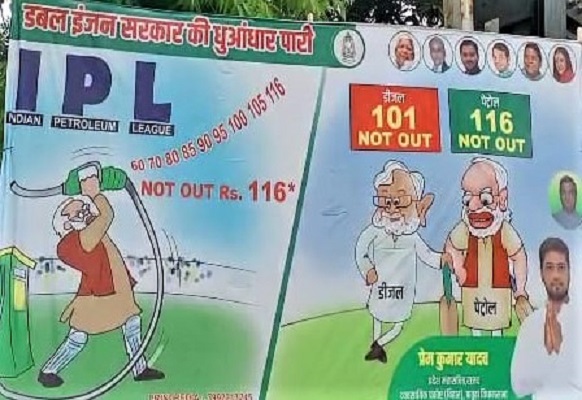 PATNA–With the petroleum prices now hitting the roof, the main opposition Rashtriya Janata Dal (RJD) has resorted to unique poster war in Bihar to take potshots at the ruling regime.

The prices of petrol have touched Rs120 a litre while the diesel price has crossed Rs100 in majority of the districts, dealing a blow to the common men at this critical time when the population is still to recover from the shock of Covid-induced lockdown.

In the posters pasted on the streets of Patna, both the Prime Minister Narendra Modi and Bihar chief minister Nitish Kumar have been portrayed as seriously engaged in playing the Indian Petroleum League (IPL), a burlesque of the Indian Premier League (IPL) involving so many cricket teams.

The poster shows the Prime Minister carrying a fuel tank nozzle in his hand like a cricket bat and hitting sixes to bring the petrol price to Rs116!

The poster compares the Prime Minister with petrol and the chief minister with diesel. “Gusty innings by the Double Engine government…Diesel not out on 101 and petrol not out on 116!” say the posters, ridiculing the role of the ruling NDA regime in Bihar and in New Delhi.

“Today, everyone is aware about the IPL (Indian Premier League) matches. So, the poster has been linked with the IPL to criticize the government’s failure to keep the prices of petroleum products under control,” RJD spokesperson Mrintunjay Tiwari said.

He said although the NDA government had been dancing to the tunes of the industrialists and corporate houses yet the RJD being the responsible opposition was trying hard to alert the government.

The shooting prices of petroleum products have become a matter of grave concern for the common men as increase in their prices has fuelled severe inflation.

In Bihar, the prices of petrol have now touched Rs118 a litre while in at least 25 districts, it is being sold for Rs117. Similarly, the diesel prices have crossed Rs103.

The BJP, however, blames the Russia and Ukraine war for the rise in fuel prices. A BJP minister in Bihar has even gone to the extent of saying that the common men won’t get affected by the fuel price hike since the majority of them use public transport.

“Common people mostly use buses. Only a few use private transportation,” was how Bihar tourism minister Narayan Prasad told the media recently adding that only politicians were raising a hue about the surge. He further went on to say that “people will get used to it” in due course.