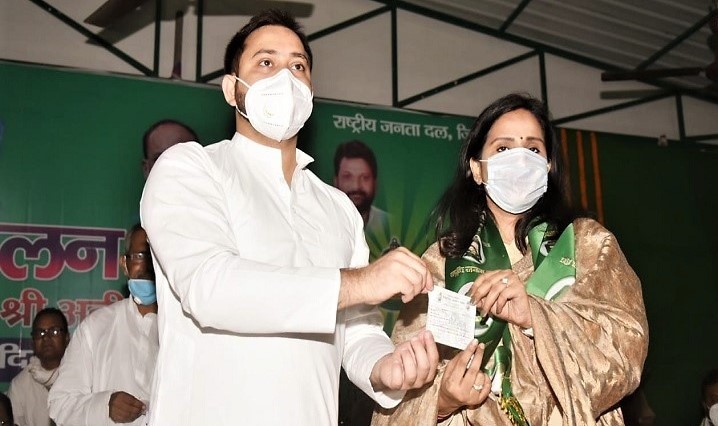 PATNA—A first cousin Aishwarya Rai, estranged wife of Tej Paratp Yadav, was on Thursday inducted into the RJD in a new political development ahead of the upcoming assembly polls in Bihar.

Dr Karihma Rai, a dentist by profession and granddaughter of former chief minister Daroga Prasad Rai, joined the RJD at a ‘milan samaroh’ organized on Thursday.

Dr Karshma is cousin of Aishwarya Rai who is engaged in nasty marital dispute with Tej Pratap. Aishwarya is daughter of Chandrika Rai while Tej Pratap is elder son of Lalu Prasad.

The induction of Dr Karishma, political experts said, is part of the RJD strategy to checkmate RJD legislator Chandrika Rai who has revolted against the RJD leadership and is said to be in touch with the JD-U.

Chandraika Rai represents Parsa assembly seat from Saran district and there are reports that Aishwarya’s cousin could be fielded from there to counter the former.

Prasa assembly seat has become a matter of prestige for the RJD after Chandrika Rai rebelled against the party leadership, and the party doesn’t want to lose it at any cost.

Aishwarya was married to Tej Pratap with much fanfare in May 2018 but very soon, differences crept up between the newly-married couple.

It took a new turn when Tej Pratap filed a petition in the local Patna court seeking divorce from his wife.

The dispute in the family finally came out on the streets in December 2019 when Aishwarya accused her mother-in-law Rabri Devi of pushing her out of her residence. Since then Chandrika Rai has not attended any meeting convened by the RJD.