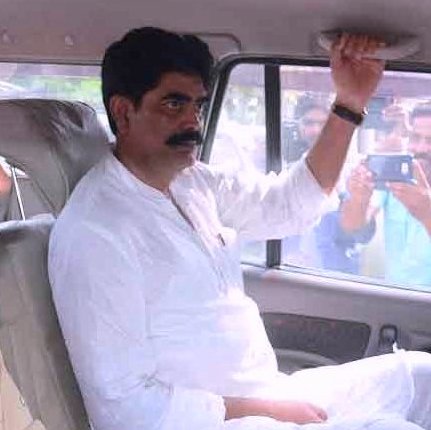 “He (Shahabuddin) is being defamed, targeted and tortured. How can you blame someone when the investigation is still underway?” asked RJD leader Prabhunath Singh talking to the media in Patna on Friday.

He alleged Shahabuddin was being denied the facilities in jail he deserved as a former parliamentarian. Singh who also hails from the Saran division is considered close to party chief Lalu Prasad.

He termed the killing of journalist as “administrative failure”.

Another RJD leader and parliamentarian Mohammad Taslimuddin too questioned the law and order situation prevailing in the state and sought resignation of chief minister Nitish Kumar.

“Law and order situation has turned very alarming in the state for which Nitish Kumar is responsible. He should resign owing moral responsibility,” said Taslimudidn, emerging out of the party meeting held at the residence of Rabri Devi here today. He represents Araria in Lok Sabha.

Shahabuddin was shifted from Siwan jail to Bhagalpur central prison yesterday in connection with the journalist murder case.

The politician facing more than 50 criminal cases was shifted to high-security Bhagalpur jail under heavy security arrangements. He has been lodged in the highly protected cell number 3 of the jail.

His shifting began shortly past midnight and he was brought to the new location by road. He reached Bhagalpur on Thursday afternoon.

The sudden shifting is being linked to the recent killing of the Sewan journalist Rajdeo Ranjan.

Reports said the order to shift him to Bhagalpur prison was issued late Wednesday night shortly after some cell phones, knives and other objectionable items were recovered from the Siwan jail where Shahabudidn was lodged.

The needle of suspicion moved towards the Siwan don after quite many of his associates have been arrested in connection with the cold-blooded killing of the journalist which evoked national outrage.

The shifting comes hours after the police raided the Siwan jail on Wednesday and conducted intensive searches there, including the cell where Shahabuddin was lodged.

Reports said the police raided the jail after getting some certain leads in the case.

The local media has reported the contract killers who were present at the place of occurrence some three hours before the killing had received as many as 36 calls from the jail.

The report added the killers contacted someone inside the jail soon after the killing after which their conversations got stopped.

Reports said the raiding team also searched the ward of Shahabudidn during the extensive search operation.

As per reports, the police have recovered eight cell phones, two knives and other objectionable documents from inmates during the search operation.