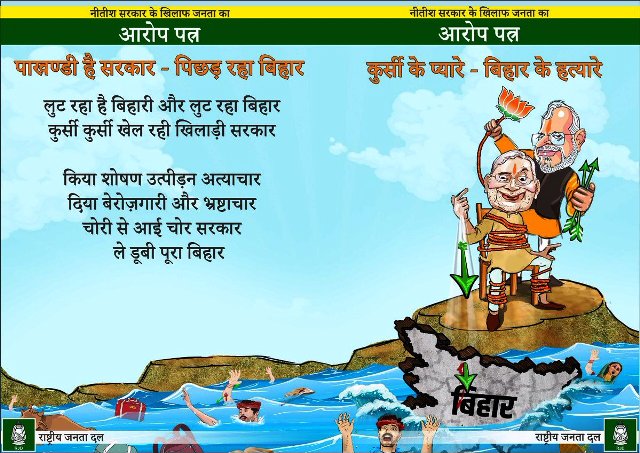 PATNA: The main opposition RJD in Bihar has come out with a “charge-sheet” against the ruling Nitish Kumar government in Bihar.

The cartoon on the charge-sheet shows Kumar feeling helpless after being tied to a chair by the long roots of Lotus, the poll symbol of the BJP, and his deputy Sushil Kumar Modi even snatching his “arrow”, the election symbols of JD-U which Kumar heads.

“The present government is a complete flop on all fronts. We hoped that the ruling NDA government which got power through back door would put Bihar on path to progress since it had ‘double-engines’ (the same government in the state and at the Centre) but it instead pushed the state on the path to disaster,” Tejashwi was quoted as saying in The Statesman at a Press conference.

He said the NDA government failed to release its “Report card” since it had nothing to show this time.

He regretted the way Bihar failed to get the Special category status despite the same government in Bihar and at the Centre.

“The very demand was, however, first made by former chief minister Rabri Devi when AB Vajpayee was the Prime Minister. Sadly, it was opposed by none other than Nitish Kumar,” he alleged adding the Narendra Modi government even failed to keep its word of granting a special package of Rs1.25 lakh crore to the state.

According to him, corruption became the most flourishing business in Bihar post NDA came to power in Jul last year. “While no industry came here, the state reported as many as 36 scams during just eight-old tenure of NDA government,” he alleged.

Tejashwi also described total prohibition a “total flop” in the state alleging liquor was easily available in the state and most interestingly ruling party leaders are involved in its “home delivery”.

He further voiced concern over the way Dalit class people were being victimized in the name of liquor ban. “Of the total 1.30 lakh people arrested under new excise law, majority of them are Dalits,” he alleged.

Amid nationwide protests by Dalits over SC ruling, now a demand for ‘Harijanistan’