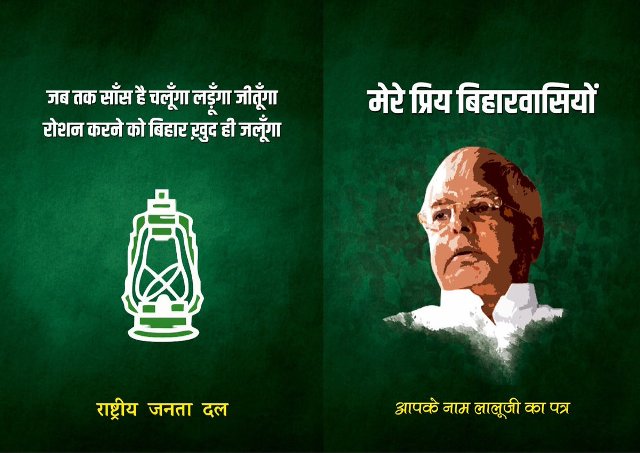 PATNA: After being sentenced by a court in he fodder scam, RJD chief Lalu Prasad Yadav said he was ready to fix himself for social justice, harmony and equality.

Attacking BJP, he said: “Rather than practising BJP’s Simple Rule – “Follow us or We will Fix you”. I will die happily fixing myself for Social justice, harmony & equality.”

In addition to the jail term, Lalu Prasad has also been fined Rs. five lakh.

Prasad sentencing followed right during the time his party, the RJD, held a meeting at the residence of his wife Rabri Devi in Patna at which an open letter written by the party chief was read out before the party legislators.

“Please don’t get disappointed. It’s your love and affection which give me a lot of strength. None has the guts to intimidate the man who enjoys the supports of millions of his supporters who are his family,” said Prasad in his open letter.

Stating that the struggle of the masses is his “capital”, the RJD chief said he would love to happily stay in jail for a hundred year for the fight for the poor.

“Don’t get disturbed a bit. Each of my sacrifices will give you strength,” narrated Prasad in his emotional letter to the masses.

According to him, he was apprehensive of facing such situation the day he decided to fight for the cause of the poor. “I knew it well that I will be put in jail, be victimized and implicated in false cases,” he said adding how his worst fears are now proving true.

‘Open jail and cow farming will be best for you’: Judge tells fodder scam convicts