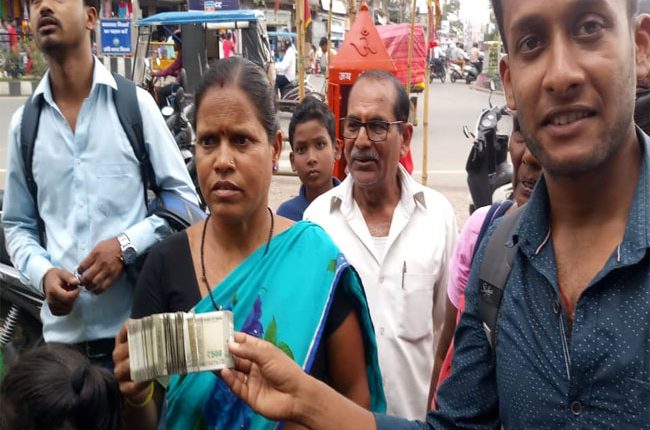 PATNA: A woman from Jharkhand state has set a new example for the society by returning Rs 50,000 to its real owner. The said Indian currency notes were lying unattended on the streets when she picked it up.

Reports said Rupa Devi, a resident of Kanke locality in Ranchi, had gone to Albert Ekka Chowk in the company of her daughter on Friday evening when she found a bundle of Rs 50,000 lying unattended on the road.

After scanning the bundle, she found the currency note carrying a slip of the Bank of India and she hurriedly decided to deposit them with the nearest branch of the bank.

In the meanwhile, local shopkeepers came to know about the incident and very soon, the news spread like a wildfire.

Shortly thereafter, the man who had lost the money rushed to spot and was very happy to get back his money.

“I had withdrawn Rs 70,000 from the local branch of the BOI. Subsequently, I was returning home on a bike being driven by my son when the one bundle of notes totaling Rs 50,000 slipped out of my pocket and fell down on the road,” said Shiv Chandra Singh.

According to him, he came to know about this after some local shop owners inquired from him if he had lost his money. The local villagers were aware that he had gone to the bank to withdraw money for constructing his house.

Man’s joy knew no bounds when he got back his hard-earned money. He happily gifted Rs 1,000 to the woman’s daughter to buy sweets.

Rupa’s honesty has become the talk of the town now.

ALSO READ: Doctor himself donates blood to save patient’s life in Jharkhand