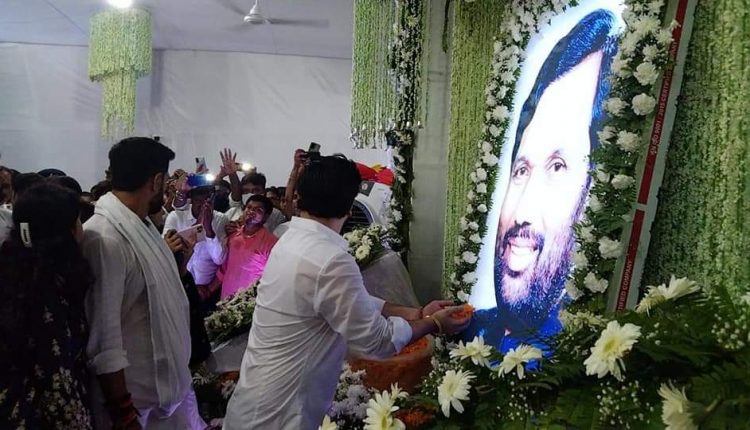 PATNA—The first death anniversary of Dalit leader Ram Vilas Paswan, the founder of Lok Janshakti Party (LJP), turned out to be a mega political event here on Sunday with a host of politicians—from ruling to the opposition—attending the function.

However, what was focal point of the event was Union minister Pashupati Kumar Paras rushing to the residence of his nephew Chirag Paswan for the first time after breaking away from the party and join the occasion.

The event was being widely described as an attempt by Chirag to unite his divided family. The issue came into sharp focus after Chirag formally mentioned the name of his uncle and cousin Prince Raj on the invitation letter.

Much to his satisfaction, Paras took time off from his busy political schedule and joined Chirag but he appeared very calm and serious.

The development assumes significance especially in the light of coup within the LJP and government’s order to Chirag to vacate his father’s bungalow in New Delhi. It was Paras who led the coup and got the reward for it with his accommodation in the union cabinet.

However, till the time of filing the report, RJD leader Tejashwi Yadav had not arrived while Chief Minister Nitish Kumar although paid tribute to former union minister yet he stayed away from the function.

Speaking to media, Chirag said, “Had he (Ram Vilas Paswan) been, he would have surely attempt to reunite the family”. He said that he had written a letter to the Bihar government requesting to install a bust of his father in the state.

Earlier in the day, Prime Minister Narendra Modi described it is an emotional day for him. “Paswan ji will always hold an importance place in the history of the Indian politics. He achieved greater heights despite coming from a simple background and always remained grounded. Whenever I used to meet him, he would express concern over the welfare of villages, poor, Dalits and unprivileged,” PM said.

Modi also said that he miss Ram Vilas Paswan as a close friend. “Even after reaching the top, he was always available with his fellow party workers and used to share their happiness and sorrows. He believed in dialogue and cordiality. This is the reason he had such good relations with political leaders across the board,” the PM said.