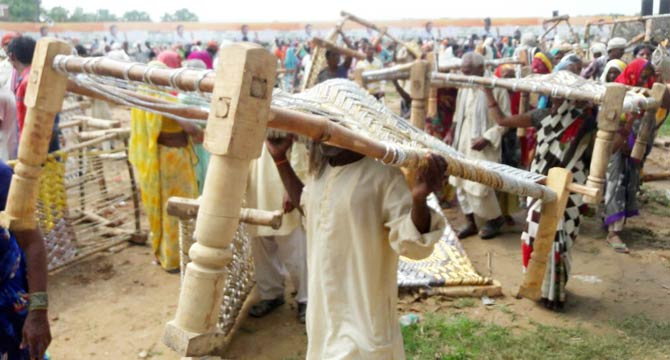 Deoria, Uttar Pradesh: As Congress Vice President Rahul Gandhi on Tuesday launched election campaign tour in Uttar Pradesh, addressing local farmers, an unprecedented ruckus took place as supporters fought among themselves and decamped with most of the cots, which were laid out at the venue to make seating arrangements, reports said.

The ‘Khaat (cot) sabha, as the meeting was being called, was part of the party’s innovative strategy to reach out to farmers.

According to reports, no sooner had Rahul finished his address where he promised loan waivers to farmers and a 50 percent cut in their power tariff,  than those attending the rally were seen walking away with most of the 2,000 e brand new cots, which the party had laid out on the sprawling ground.

Many were seen engaged in  tussle with others over the cots to take it home.

The khaat sabha, fashioned after the traditional village meetings, where elders deliberate among themselves by seating on wood and rope-made cots,  marked the beginning of Gandhi’s farmer-focused month-long UP yatra on the run-up to the Assembly elections to be held early next year.

In his speech, Gandhi predictably launched a scathing attack on  Prime Minister Narendra Modi and accused him of forgetting farmers.

“Modiji talked a lot about farmers and how he intended to help them. But as soon as he came to power, farmers were promptly forgotten,” he said.

Gandhi began his 2,500-km journey from Deoria in eastern UP to cover  223 of Uttar Pradesh’s 403 assembly constituencies.