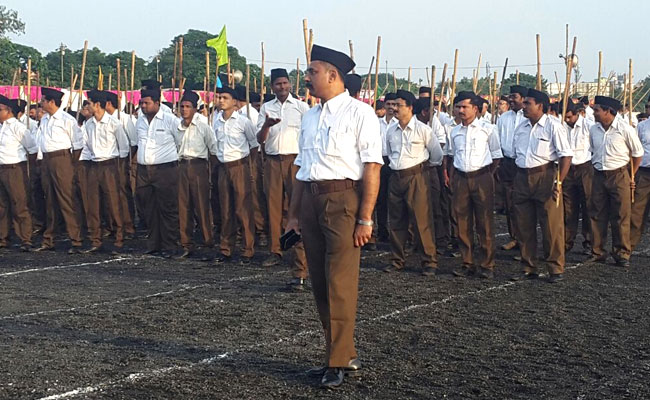 Rashtriya Swayamsevak Sangh (RSS), the ideological fountainhead of the BJP, in a historic move today cast away its iconic Khaki shorts which has been its trademark dress for the past 90 years.

The transformation indicates the “generational change” in the organization which came into existence on September 27, 1925 while India was under British rule.

Much to everyone’s pleasant surprise, all from the RSS chief Mohan Bhagwat to Union minister Nitin Gadkari and Maharashtra chief minister Devendra Fadnavis were seen attending the function dressed in full pants on Dussehra day today at Nagpur.

So what prompted the change in their uniform? Was it a routine act or done under compulsion?

Rashtriya Janata Dal (RJD) which is headed is Lalu Prasad claims it was Rabri Devi’s taunts which compelled the RSS to replace half-pants with full pants.

“After I made a strong criticism of elderly RSS workers shamelessly wearing half pants in front of people, it remained in their memory following which now they have decided to wear brown trousers in place of khaki shorts,” Rabri who is wife of RJD President Lalu Prasad, had told reporters recently.

RSS chief Prasad too has claimed it was Rabri’s comments which forced RSS change its dress code.

“Rabri Devi has forced RSS to change its dress code,” was how Prasad tweeted in March this year.