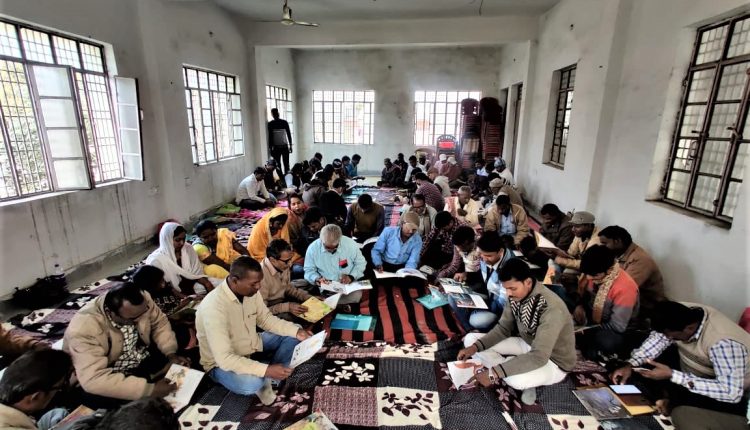 PATNA—A unique book donation campaign launched by a young Indian Administrative Service (IAS) officer in Bihar has brought pleasant changes in the society. The villagers and youths who would lazy around the lanes and by-lanes or the village squares rubbing tobacco in their palms or playing cards to pass time can now be seen reading books in the libraries set up with the books donated by the book lovers.

The district which has scripted the saga of delightful change is Purnia, an eastern Bihar district some 350 km from Patna. Such has been the impact of the book donation campaigns kick-started by the local district magistrate Rahul Kumar that each of 230 village councils now boasts of a library.

The libraries functioning in their villages are now attracting the crowds of both villagers and the youths preparing for competitive examinations. It is really a pleasant sight to see the villagers in their lungis (a type of sarong), trousers and other casual dresses sitting on the ground or on chairs and engrossed in reading books.

Prior to opening of library, Mohammad Usman would often join other co-villagers at the local mosque to pass his free time. This was his daily routine but after the setting up of village library, he is a regular visitor to the library. “Whenever free from domestic and agricultural works, I visit the library and read books in the company of co-villagers. I love reading story books,” said Usman, a resident of Baisi block.

He is among thousands of villagers currently doing the same thing. Mithilesh Kumar Mishra from Babni village council in Dagarua block too has been making full use of leisure time these days. Instead of wasting time in the company of villagers or roaming around the local village markets, Mishra rushes to the village library to read books for which no fee is charged.

But what has drawn the attention of the local populace is Varun Paswan, a ‘chaiwala’ (tea-seller) from Parora town in Purnia, who devotes at least two-hour time every day reading books in the village library. “Books are the source of various information and I want to grab it,” says Paswan, 50. With tea-sale being his lone source of income, he visits library in the afternoon when he has less number of clients at his tea stall.

The credit for this directly goes to the district magistrate Kumar who launched the “donate book campaign” to make students and villagers armed with knowledge. He launched the campaign in January 2020 but it hit roadblocks due to COVID-19 pandemic leaving disastrous impact on the humanity and the villagers battling hard for survival.

By the end of 2021, the campaign picked up momentum with the villagers and book lovers liberally donating over 150,000 books which were lying useless at home. Two year-long campaign has now seen all the 230 village councils having a functioning library, turning the whole region into a “study hub”.

The district magistrate had once gone on surprise inspections of schools located in rural areas of the district when he found students battling hard to arrange for books with libraries missing from majority of village councils and schools. Returning home, he discussed the issue with intellectuals and officials, and then launched the “donate book campaign”. The campaign received such a support from the masses that quite many villagers and sensible persons even donated new books after purchasing them from the market.

Kumar, a bibliophile, still vividly remembers how the libraries helped him and his friends shape their career, and hence he wants books to be available to students for study at any cost. “Libraries, small or big, create a difference in one’s life”, he told the local media adding, “If our villages are equipped with libraries, students from rural areas need not go to the big cities like Delhi or Patna to pursue their career.”

Quite many libraries, however, don’t have basic infrastructures like book shelves, reading tables and chairs and hence many villagers to sit on the carpet spread on the ground to study books. But the district magistrate has now decided to spend Rs25 millions on improving the basic infrastructure in the next financial year.

Litigants spend Rs3 lakh over dispute of Rs10 in Bihar