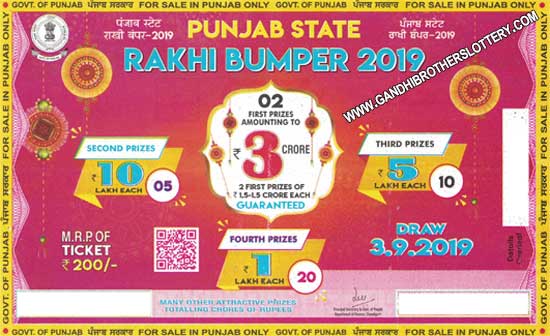 CHANDIGARH: The Winner of Punjab State Rakhi Bumper-2019 winner Lab Attendant Harbhagwan Gir wants to use the money for higher studies of his children.

Gir, who is working as a Lab Attendant in Kendriya Vidyalaya, 3 BRD Air Force Station Chandigarh and he had recently won the first prize of Rs 1.5 crore.

After submitting the documents to the Punjab State Lotteries Department at Chandigarh for encashment of the prize, Harbhagwan Gir said he had never thought in his wildest dreams that he will become a crorepati overnight.

“It’s still hard to believe that I have become a crorepati and it’s like a dream come true for me,” he said.

Talking about the future planning, Gir said “firstly he would buy a house in tri-city with the prize money which would also be a great help for him to get his children pursue higher studies and settled in life.”

He also expressed satisfaction over the transparent and smooth system pertaining to the draw of lotteries adopted by the Punjab State Lotteries Department.

A native of Bahadurpur Fakiran village in Patiala district, Harbhagwan lives in a rented house at Zirakpu and he had lost his arm in accident during childhood.

Father of two daughters and son, Harbhagwan said his elder daughter is married and a daughter and a son are studying in twelfth class.

Indian man arrested 41 years after he had stolen a goat