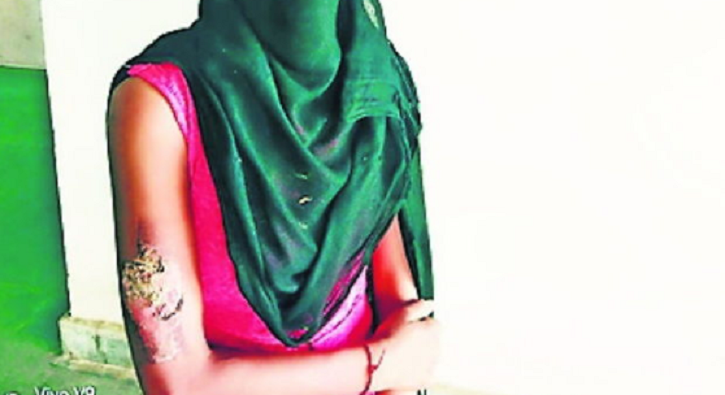 PATNA—A young girl from Bihar was dragged to a open court of villagers and branded with a hot iron for allegedly eloping with her boyfriend.

The horrible incident reminding the medieval barbarism took place in Siwan district of Bihar a couple of days back.

According to reports in the local media, the young girl from Janakinagar village in Siwan district had allegedly eloped with her boy friend recently which angered the local villagers.

A couple of days back, a village court was held over the issue during which the right arm of the girl was branded with a hot iron as writhed in pain.

Reports said the girl kept on pleading her innocence but none listened to her appeal. Even her relatives turned their faces away.

On Sunday, the victim reached the local police station and registered a case against seven persons in connection with the incident.

“We have registered the case and further investigation is on,” local police station in-charge Randhir Kumar told the local media on Monday.

Bihar, of late, appears to have turned into “graveyard” of young lovers with the villagers serving them crude punishment for falling in love.

In February last year, two young lovers were killed, chopped into pieces and then burnt on the same funeral pyres in the Gaya district of Bihar.

The only crime of Sneha Kumari, 17, was that she had fallen in love with Vikas Paswan who ran a coaching centre in the areas.

The girl belonged to powerful Yadav caste which falls in the OBC category whereas the youth came from Dalit community.

Another such incident was reported from Patna district in 2019 when a youth had his private parts chopped off with a sharp-edged weapon before being beaten to death along with his girlfriend for the same reason. The girl came from backward caste whereas the boy was from influential upper caste Rajput

In January 2019, a young girl was allegedly chopped to death by her parents after her love affairs with a local boy had become public.

Even more chilling incident of “honour killing” was reported in May 2015 when eloping young lovers were mercilessly thrashed, strangulated to death and then burnt on the same funeral pyre in the same Gaya district.

But, probably the more grisly gruesome incident took place in 2008 when a teenager was thrashed and paraded through the streets with his head tonsured before being thrown under the wheels of a speeding train in Kaimur district.

His only crime was that he had dared to write a love letter to a girl from different caste.

Bihar: Barber tortured to death for refusing hair cuts as atrocities on Dalits, poor go up during lockdown