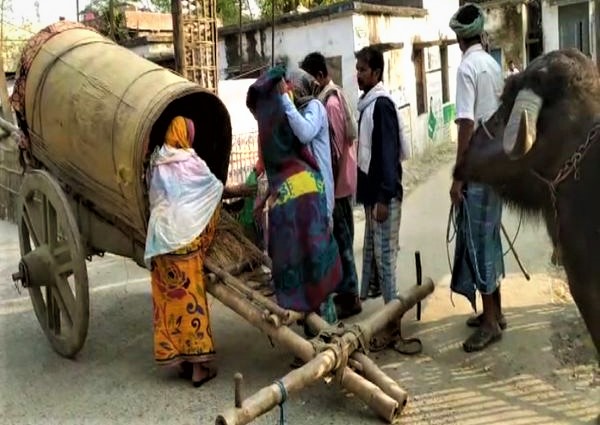 PATNA—Authorities in Bihar have ordered an investigation after a nine-month-pregnant woman was taken to hospital on a buffalo cart since the hospital ambulance had refused help citing broken roads.

Naimul Haque, a resident of Katihar district, called up the local hospital authorities for ambulance help when his daughter developed labout pain earlier this week but they flatly rejected his request saying the road condition was not good.

Eventually he arranged a buffalo cart to carry his daughter to the nearest hospital, some 4 km away from his village. It took two hours for Naimul to reach the primary hospital. Doctors said both the mother and her baby are safe.

Local media reported the hospital again didn’t provide them ambulance to rush back home after she had delivered the baby. As a result of which, they had to ride the same buffalo cart to reach home.

The hospital authorities have ordered an investigation into the gross act of callousness on the part of the officials concerned.

“This (the incident) is very shocking. We have taken the matter seriously and ordered an investigation into the matter. Whoever are found guilty will face action after the probe,” deputy superintendent of the hospital Asha Sharan was quoted as telling the media.

Bihar, of late, has reported several deaths of mothers or their babies for not admitting the delivery patients to the hospitals on time.  The government report though claims that the Maternal Mortality Ratio (MMR) in India has declined from 122 in 2015-17 to 113 in 2016-18.

According to a report of the Ministry of Health and Family Welfare released in July 2020, India is on track to achieving the MMR targets for Sustainable Development Goals (SDG) of seven million live births by 2030.

The report added that the number of states which have achieved the SDG target has now risen from 3 to 5. They include Kerala, Maharashtra, Tamil Nadu, Telangana and Andhra Pradesh.