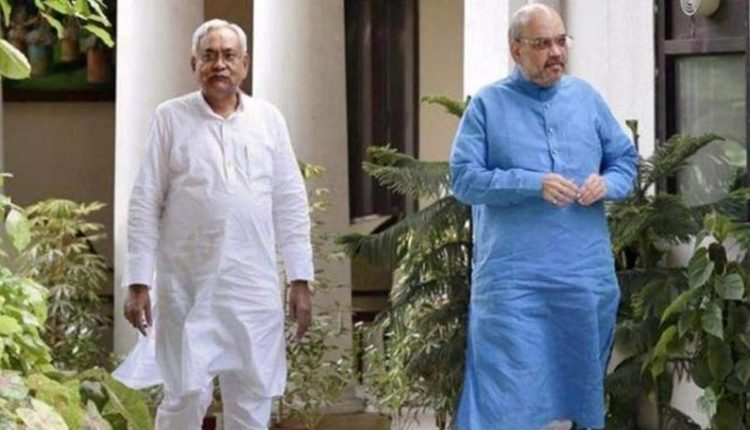 PATNA: Is the BJP working on a strategy to make Bihar free from Nitish Kumar after gaining thumping majority in its second term? Kumar has been in saddle since 2005.

What has triggered this debate are the recent three political developments which amply indicate JD-U chief has virtually become a “liability” for the BJP.

The whole story first came to light when a BJP lawmaker Sachchidanand Rai suddenly issued a statement to the media stating this can’t be the priority of the BJP to make Nitish Kumar the chief minister again.

“Will the BJP put a condition before Nitish Kumar that the next chief minister will be from the BJP?” asked Rai and wondered why the BJP gifted so many seats to the JD-U which won only two seats in 2014 LS polls.

He also questioned his party’s move to allow the JD-U burgle into BJP’s vote-bank despite Nitish Kumar has adopted a different stand on issues like Ram Mandir, article 370 and Uniformed Civil Code (UCC).

Curiously, Rai made these statements on May 21—two days after the Lok Sabha elections were already over and the chief minister was free from his month-long intensive poll campaign. The BJP, however, played down the issue terming it as “personal view” of Rai.

Former Bihar BJP president Gopal Singh also dropped amply hints about such treatment was when he slammed the chief minister for treating the BJP shabbily while the JD-U enjoyed majority in the Bihar assembly.

“With the help of the BJP, he (Nitish Kumar) ran the government in Bihar for seven long years. But, the moment he realised that he can run the government independently, he kicked out our party,” Singh was quoted as telling news agency ANI on Friday.

Singh is apparently referring to June 2013 incident when the chief minister had broken 17-year-old alliance with the BJP and formed his new government with the opposition members. The move left the BJP in the opposition camp overnight although it was because of the saffron party that the Nitish Kumar had won the 2010 assembly elections.

Nitish Kumar took the step shortly after it became clear his Gujarat counterpart Narendra Modi could be projected as NDA’s prime minister candidate.

BJP’s one berth offer to Nitish Kumar’s JD-U finally seems to be confirming that his days are numbered now. Kumar had no option but to return to Patna after rejecting the symbolic participation in the Modi cabinet.

According to political pundits, the BJP is well aware of the fact that Nitish Kumar has very few or no options in the current situation.

Previous records have shown Nitish Kumar has performed only when he fought elections in alliance while he doesn’t have the political strength to go it alone. He fought elections alone twice—first in 1994 when he was in the Samata Party and then in 2014 when he was the chief minister but on both the occasion, he failed very badly.

The Congress looks eager to welcome him in its camp but Kumar knows this will be a futile job in the company of a party with just 7.70 percent vote share while the RJD which has larger support base is mysteriously silent over the issue.

So until, the RJD comes to his support, Nitish Kumar can’t do anything. Kumar has already announced Bihar doesn’t require “Lantern” (poll symbol of the RJD). So, just wait how the overall things unfold in Bihar in days to come.

“BJP is virtually trying to get rid of Nitish Kumar after successfully bundling out Lalu Prasad for zero. He must under the message now,” feels political commentator Premkumar Mani who once worked with the Bihar chief minister.

According to him, Nitish Kuamr has become a ‘liability’ for the BJP and it will be a sort of political brilliance for Kumar if he is able to get out of the saffron camp in an honourable way.