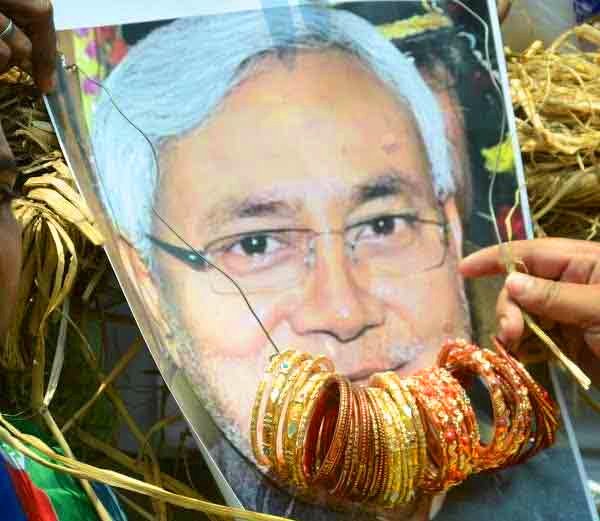 PATNA: The ghastly killing of a teenager by a ruling party politician’s son in Bihar has alarmed the BJP and its allies.

Angry BJP MPs today sought imposition of President’s Rule in Bihar citing deterioration in the law and order situation in the state.

Raising the issue during Zero hour in the Lok sabha, BJP MP Janardan Singh Sigriwal alleged the ruling coalition legislators and their kin have openly indulged in crime and demanded to bring the state under President’s Rule to stem the rot.

Another BJP Ashwini Kumar Choube too cited a number of incidents to prove the law and order situation had collapsed in the state leading to return of proverbial “Jungle Raj”.

The suspended RJD MP Rajesh Ranjan alias Papu Yadav also urged the Centre to interfere in Bihar matters and dismiss the government alleging a virtual “Goonda Raj” had returned to the state.

“Right now, a peculiar situation prevails in the state where one leader is daydreaming of becoming the Prime Minister whereas another one wants to become the Chief Minister while the people of the state live in a state of fear,” alleged Yadav, seeking immediate intervention of the centre in Bihar affairs —a charge strongly countered by the ruling coalition leaders in Bihar.

The LJP which is coalition partner of the BJP too demanded imposition of President’s Rule in the state citing poor law and order situation in the state.

“We will be meeting the Union Home Minister very soon seeking imposition of President’s Rule in the state,” said Chirag Paswan, LJP MP and son of party chief Ram Vilas Paswan, saying “The time is ripe for central rule”.

Stating that his party had been making this demand for long, he said the killing of a teenager in Gaya has now proved the law and order situation had completely collapsed in the state.

The demand for President’s Rule comes barely days after the state administration claimed the crime situation had come down by about 27 percent post liquor ban in the state.

Image Caption: Protesters offering bangles to the photograph of Bihar chief minister Nitish Kumar in Gaya to protest killing of a teenager by son of a local JD-U legislator

Angry protests in Bihar over killing of teenager by lawmaker’s son, accused still out of police reach