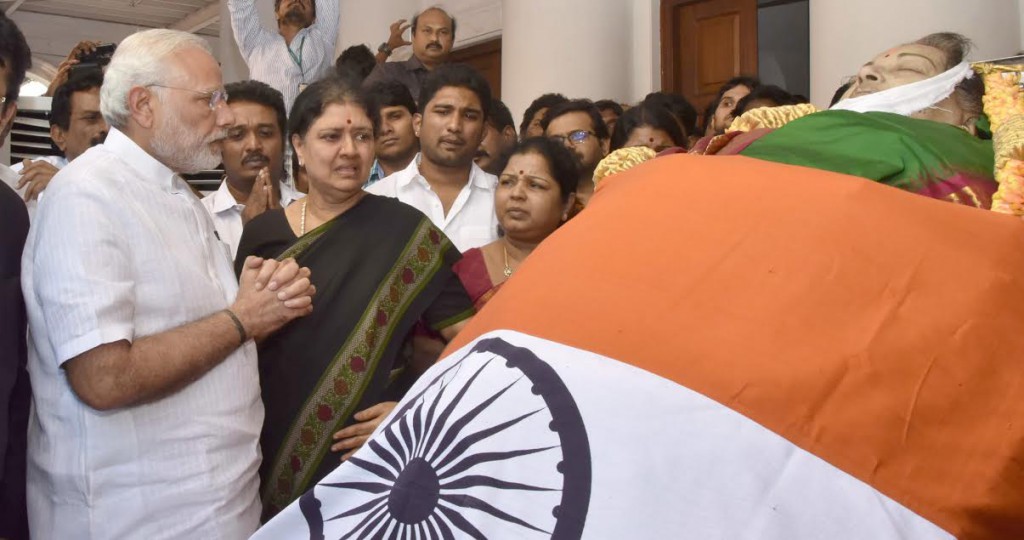 Sushma Swaraj, Minister of External Affairs, said, “It is tragic. It is painful. She was a woman of dignity and self – respect. We shared a warm personal relationship.#jayalalithaa.”

Ram Vilas Paswan, the Union Minister of Consumer Affairs, Food & Public Distribution said “I am deeply saddened by the demise of Ms. J. Jayalalitha. My thoughts and prayers are with the people of Tamil Nadu in this hour of grief. The nation will miss a strong leader like Ms J. Jayalalithaa”. Shri Paswan said that she was popularly known as Amma for her pro poor approach and shall be always known for her contribution in progress of Tamil Nadu and its people.”

Jammu and Kashmir Chief Minister, Mehbooba Mufti  said, “Jayalalithaa as a leader of masses who would be remembered long for introducing many innovative schemes and programmes for public welfare.

In her condolence message, J&K Chief Minister said that J. Jayalalithaa was personified women empowerment who brought a unique style to country’s politics.

Odisha Chief Minister Naveen Patnaik, before leaving Bhubaneswar to attend the late TN chief minister’s funeral, tweeted, “I am leaving for Chennai now to pay my homage to late Jayalalithaa ji and join the people of Tamil Nadu in this moment of bereavement.”

Shiromani Akali Dal tweeted, “India mourns the sad demise of iconic leader #Jayalalithaa. She will be remembered forever for her contribution to Indian politics.”

Cricketer Suresh Raina said, “Deeply saddened by the news. My condolences on the passing away of Jayalalitha ji. I extend my sympathies to friends and family.”

The BCCI posted on Twitter, “RIP J Jayalalithaa ji. Our deepest condolences to Amma’s loved ones and supporters across India.”

Actor Anupam Kher tweeted, “Deeply saddened by the passing away of the charismatic leader of the masses Jayalalitha ji. May God rest her soul in peace.”

Actor and film director Shekhar Kapur tweeted, “Keeping aside her politics and power. She was one brave women that refused to be cowed down in a dominating man’s world #jayalalithaa RIP.”

The late TN chief minister Jayalalithaa will be cremated at Marina Beach at 4:30 pm on Tuesday.

According to media reports, the gun carriage vehicle for Jayalalithaa’s funeral was sent from Delhi to Chennai via flight through special arrangements.