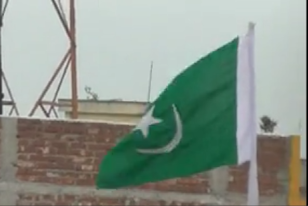 The flag was found unfurling in the Kahardi locality of Nalanda district since Wednesday evening, witnesses said. According to reports, the house belongs to one Mohammad Ziauddin Raza Khan.

“We were shocked to see the Pakistan flag unfurling in our locality. This is purely an anti-national act. The administration should initiate action against the man or we would be forced to protest on the streets,” a local resident told the media today.

Taking seriousness of the situation, the local administration has seized the flag and raids are on to arrest the man accused of unfurling the flag.

“We have asked the SP to arrest the man who committed the crime. We won’t tolerate such act,” said JD-U spokesperson Ajay Alok.

Last week, the police had arrested one person after some Muslim protesters were found shouting slogans in favour of Pakistan at a rally taken out in Patna in support of controversial Islamic preacher Zakir Naik and AIMIM leader Asaduddin Owaisi.

Bihar woman who was transfused HIV-infected blood by her hubby, dies