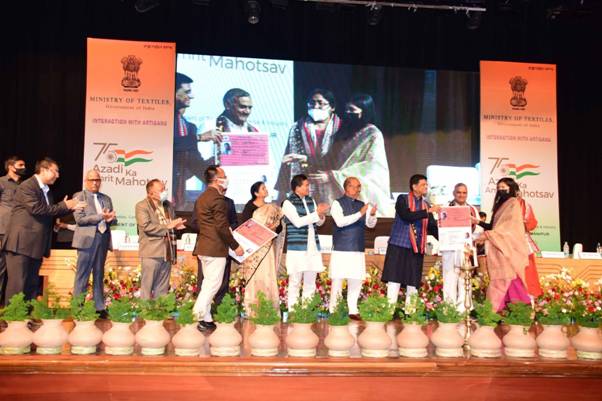 The Ministry of Textiles of Government of Indian would set up a mega handloom cluster at Nongpok Kakching, the native village of Olympic silver medalist Saikhom Mirabai  Chanu in Manipur state in honour of her contribution for the nation.

Mirabai has been recognized as the “Handloom Brand Ambassador of Manipur” by the Ministry.

The project would cost an estimated amount of Rs.30 crore under the National Handloom Development Programme.

Union Textiles Minister Piyush Goyal, on Saturday, announced this during his two-day visit to Manipur. He along with Manipur Chief Minister N Biren Singh and his Cabinet colleagues opened a thematic exhibition of crafts in the capital city of Imphal.

“India is proud of Mirabai Chanu. She has brought laurels to the nation. She is the jewel not only for the northeast region but also for India,” the Minister stated.

Goyal also handed over a cheque of Rs.30 lakh to Mirabai’s mother Saikhom Tombi Leima who received it on behalf of her daughter.

The Union Minister further announced setting up of a handloom and handicraft village at Moirang in Bishnupur district of Manipur where the Indian National Army (INA) had hoisted the national flag for the first time on the Indian soil.

“It will pay befitting tribute to the freedom fighters, particularly to the soldiers of the INA”, Goyal said.

Manipur’s textile product is well known not only in the country but also across the globe, the Minister mentioned.